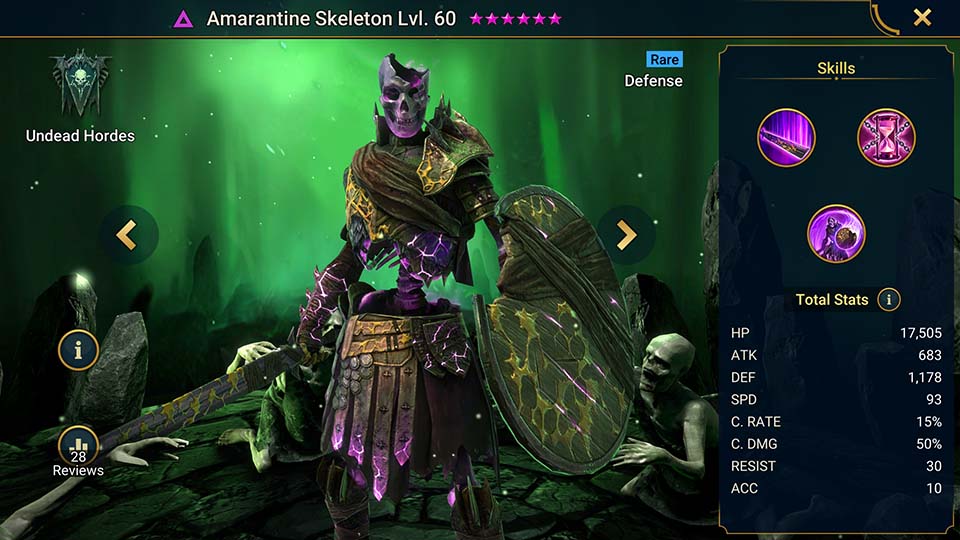 Touched by the power of the Scarlet Witch we expected big things from the Amarantine Skeleton. He managed unthinkable acts as the power grew within him condemning whole cities to ruin, but eventually the power corrupted all that he was until he was left a glowing husk of the sorcerer he once was. And yes, now he just plain sucks!
His skills have very little genuine synergy with an A1 Block Buffs, A2 Block Active skills generally PVP skills but only single target and with no real damage to back them up he will struggle to help you. The only place I would consider building him for is Faction Wars and even then I would not take past level 50 as this faction has way better champions. If you use him this way make sure you give him enough accuracy to land his abilities.

Amarantine Skeleton is a Void affinity rare champion from the Undead faction. Why should you use books and masteries on him? You shouldn’t. Don’t do it!

We recommend you use these blessings for Amarantine Skeleton.
Team Blessings should be limited to 1 per team. For more information, please read our Team Blessings guide here (coming soon).