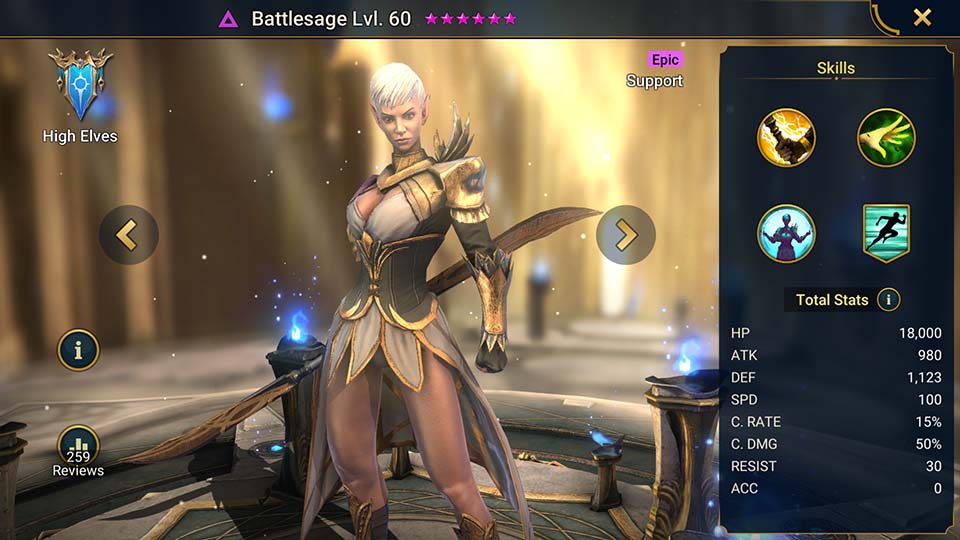 One of the earliest Champions to stride into Teleria, Battlesage has a unique ability to remove all debuffs and then replace this with an Attack Buff that cannot be removed. This is particularly useful in scenarios where you are expecting foes to remove your buffs or if you expect to get debuffed with Decrease Attack.

She also brings a reasonably useful A3 which includes a revive on death ability for a single target although you will find it hard to get significant value from this ability as it is only single target on a 4 turn cooldown (when booked).

Finally she brings an All Battles 19% Speed Aura, one of the most valuable auras and difficult to find, and an AoE A1 making her viable for a Stun Set.

She has been power crept over the years but she is a solid epic that can help carry you through some dangerous encounters!

Places a 50% Increase ATK buff on all allies for 2 turns, then removes all debuffs on all allies This buff cannot be removed.
Level 2: Cooldown -1

Places a Revive on Death buff on a target ally for 3 turns. The ally will instantly revive if killed.
Level 2: Cooldown -1
Level 3: Cooldown -1

Increases Ally SPD in all battles by 19%