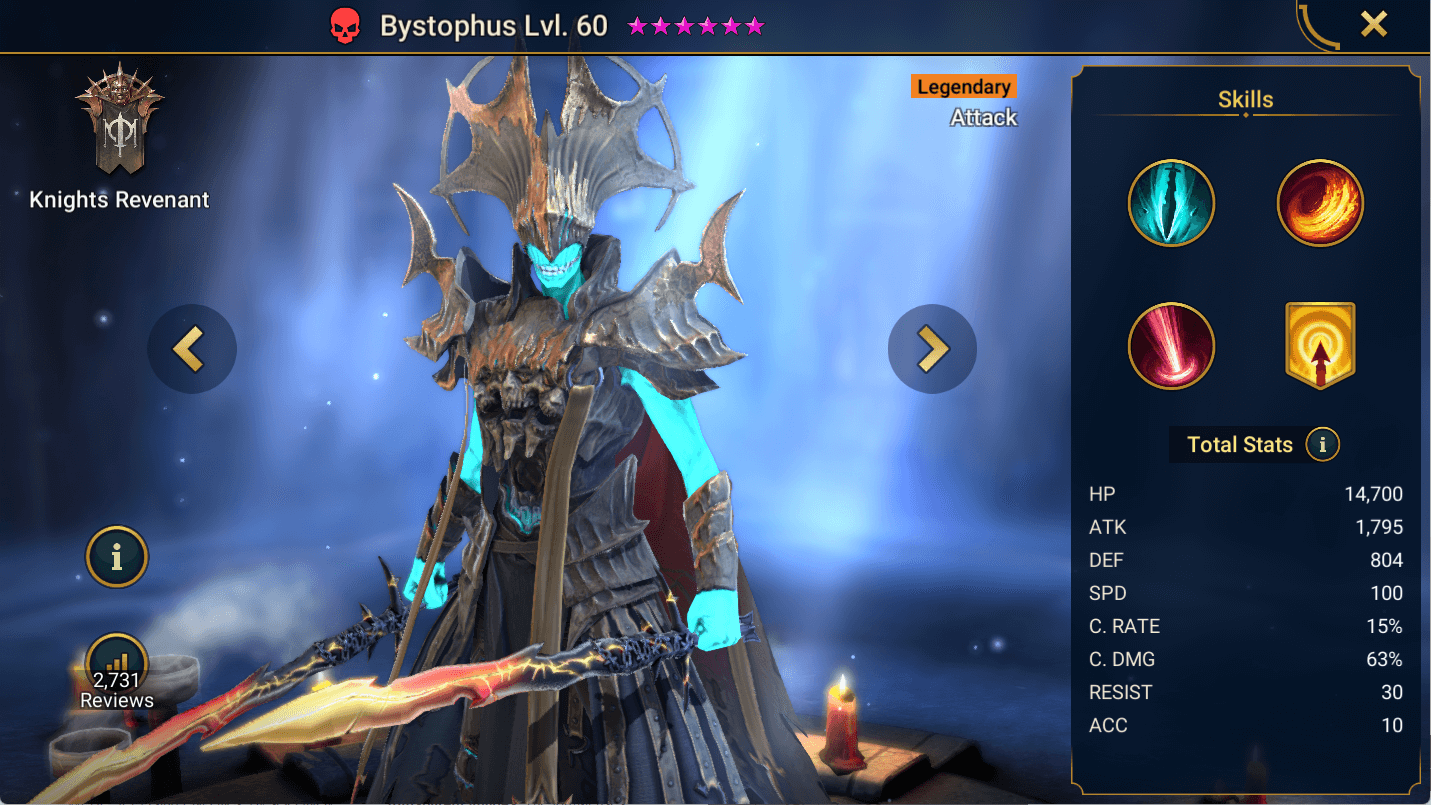 Bystophus is the formal representative of the Blue Man Group band in Teleria. His most famous asset is that he has the highest base attacks in Raid Shadow Legends which would make you think he also is the hardest hitting champion in Teleria. Unfortunately, he actually is not in the top 10 damage dealers due to his multipliers. He does have a pretty unique kit, being able to place AoE Decrease Defence and Block Active Skills debuffs, which was recently buffed to 100% chance when booked in Patch 5.20. His A2 has a 100% chance to critically hit any enemy under Block Active Skills.

You can use Bystophus in a few ways. If you opt for a Damage build, you should probably look to pair him with a Countess Lix, Karato Foxhunter or Lugan the Steadfast all of which can place the Block Active Skills debuff on an AoE with 100% chance (books may be required). This will allow you to ignore the need for critical rate in your build and focus on Attack and critical damage stats. If you opt for a debuff build then you should focus on reaching high Accuracy levels to enable his A3 to lockdown enemy waves from using their abilities. He can also help setup Konstantin the Dayborn‘s A2 that require both debuffs to gain Ignore Defence. In addition his A1 can apply a fear to any enemy under Block Active Skills. I would avoid blending your builds as generally you will find you won’t hit hard enough if your goal is to Nuke or you will resist in many cases.

His best areas are probably as an Arena nuker (although he will probably not have viability in high end arena), as a Wave control champion in places like Doom Tower or to help lock down those tricky 3 Valkyrie waves in Faction Wars.

Increases Ally ACC in all battles by 70.

Nuker
Debuffer
Offense
Defense
<img title="Shadow Heal - Heals this Champion by 6% of their MAX HP each time an enemy is healed. Occurs once per turn." alt="shadow-heal" class="lazyload ignore-lazy" src="data:image/gif;base64,R0lGODlhAQABAAAAACH5BAEKAAEALAAAAAABAAEAAAICTAEAOw==" data-orig-src="https://hellhades.com/wp-content/plugin