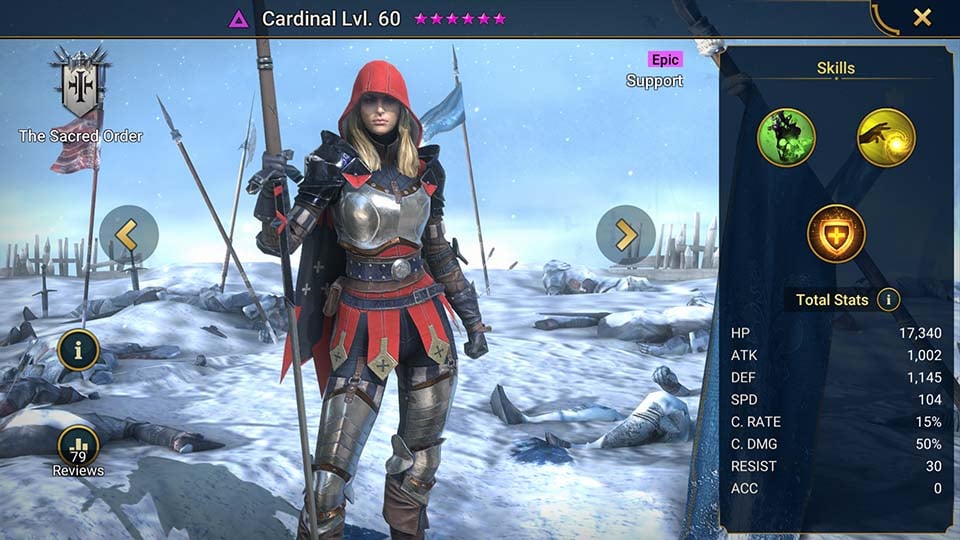 Cardinal has a sword too long for her and why doesn’t she have a helmet when she’s going into war?!

She is a Void epic from the Sacred Order faction. She has the best revive ability in the game ensuring that whoever she revives gets to go next! Cardinal has been used in a lot of Arena compositions in Platinum play where the rest of the team are made to die, be revived and then NUKE, she can be really fun to use.
Aside from Arena, Cardinal is one of the best champions in the Sacred Order for Faction Wars bringing a full team revive helping you achieve 3 stars in every level. I tend to build my Cardinal as a fast tank with high resist, defence and HP.

Cardinal is a great champion and extremely fun in niche Arena teams.

Revives all dead allies, heals them by 25% of their MAX HP, and boosts their Turn Meter to max.
Level 2: Cooldown -1
Level 3: Cooldown -1

We recommend you use these blessings for Cardinal.
Team Blessings should be limited to 1 per team. For more information, please read our Team Blessings guide here.