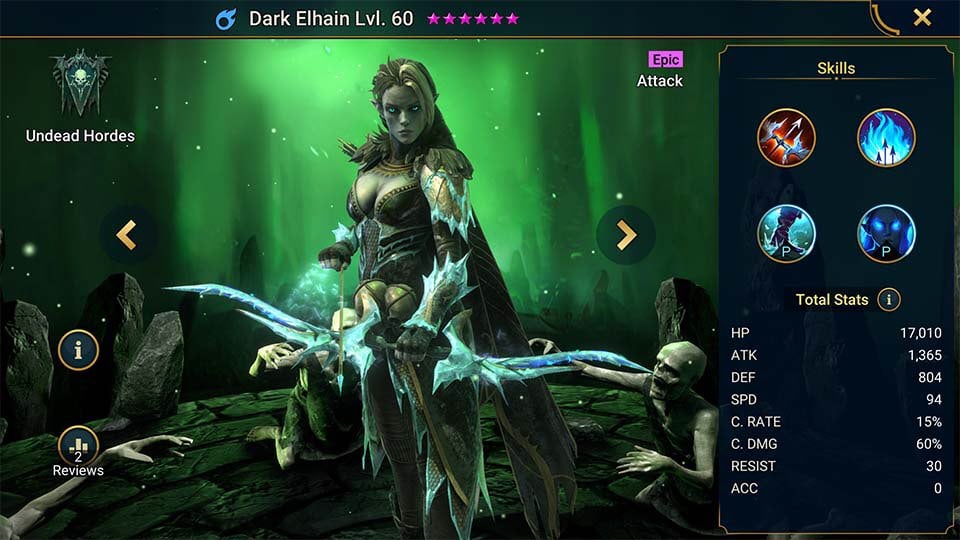 Elhain set off of a quest with 3 other heroes, Kael, Athel and Galek. Their goal was to destroy Hellrazor the mighty dragon in its lair. Only 3 heroes returned with Elhain beaten eaten whole! What the others did not know was in her death Elhain grew in power coming back in her Dark form ready to fight the battle with the Undead.

Dark Elhain is a Magic affinity champion from the Undead Hordes faction. She was introduced as a counter to the freeze meta which appeared in December 2019 when a new legendary fusion Tormin the Cold was added to the game. Dark Elhain is very strong against freeze champions as her passive activates an Increase Atk buff then her A2 which is a hard hitting AOE nuke.
This makes Dark Elhain strong in certain Arena match ups and strong in the Ice Golem. She also has a great utility for Doom Tower helping with tough waves of enemies with a strong AOE hit and good counters to freeze waves, then comes into her own against Sorath the frost spider!