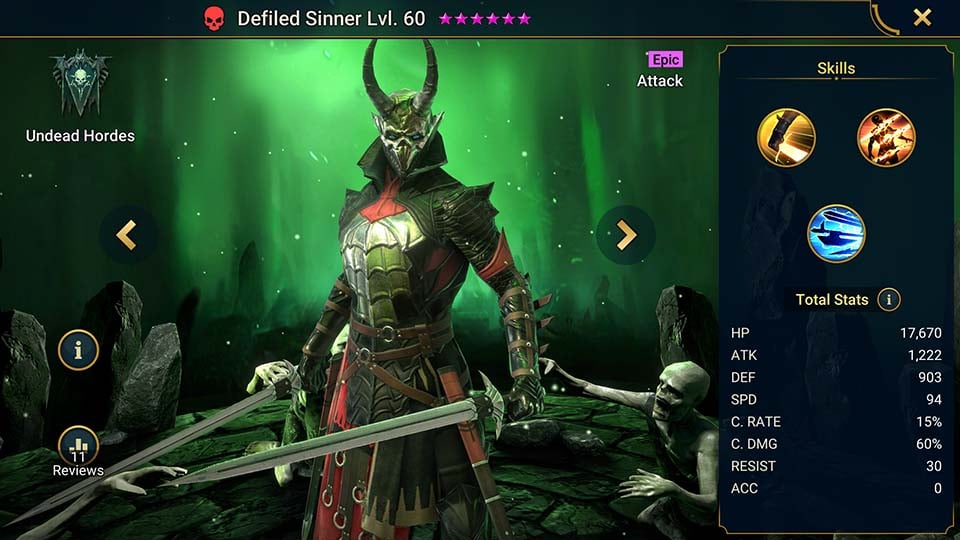 Defilled Sinner was originally a captain amongst the Demonspawn but was exiled when he failed his lord during a battle with the Undead. Taken hostage he fought his way through the slave pens to buy his own freedom now looks to climb the ranks of the undead Hordes to eventually battle his old masters.

Defilled Sinner is a Force affinity Epic from the Undead Hordes. He went top tier AOE damage dealer to a pointless champion when his A2 was nerfed to do a tiny enemy max HP hit compared to his epic counterparts – Seer, Royal Guard and Husk.
Still a decent amount of damage from his other abilities he is very close to good, but not quite good enough at the moment to invest resources.

Standard PvE
Nuker
Offense
Defense
Support
Offense
Defense
<img title="Selfless Defender - Decreases the damage an ally receives from the first enemy hit in each round by 20%. This Champion will receive that damage instead" alt="selfless-defender" class="lazyload ignore-lazy" src="data:image/gif;base64,R0lGODlhAQABAAAAACH5BAEKAAEALAAAAAABAAEAAAICTAEAOw==" data-orig-src="https://hellhades.com/wp-content/plugins/rsl-maste