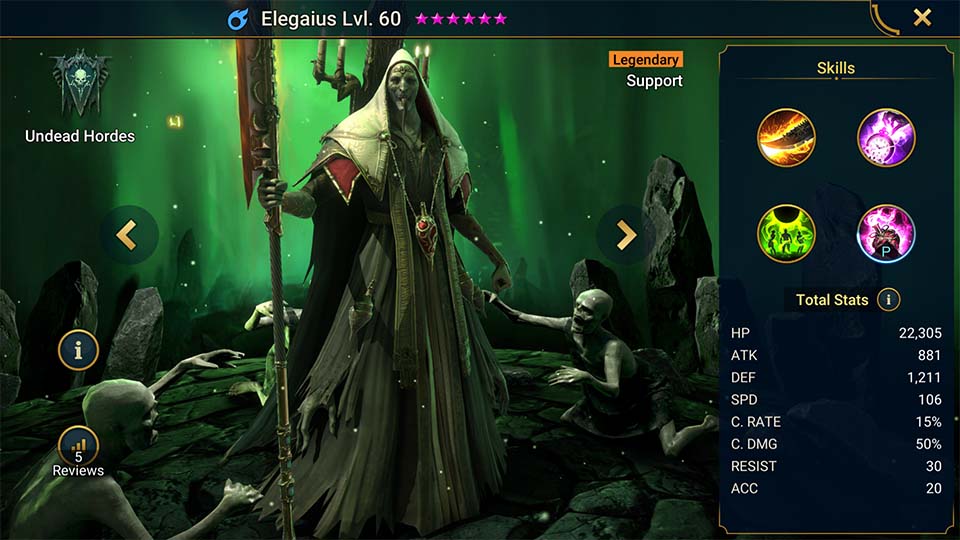 Timothy’s mum told him, never lick the lampposts during the winter, your tongue will stick to it! He died being dragged away from that post with his tongue stretching to 4 times its length. Arbiter felt pity for this poor boy and so allowed him to join the undead, but could not fix that damn tongue!

Elegaius is a Magic affinity legendary from the Undead Hordes faction. Elegaius was introduced as a fragment summon champion with all players able to summon provided they completed enough fragment events. Elegaius is a mid-tier legendary that can really help you progress through waves in Faction Wars with multiple champions that are the same.
Elegaius is also a strong champion for Arena with an ability to strip 2 buffs from all enemies and reduce their turn meter, you will need accuracy to enable these skills. This works great as a champion to set up your damage dealers.

Overall Elegaius is seen as mid-tier with some areas of speciality.

Debuffer
Offense
Defense
<img title="Wisdom of Battle - Has a 30% chance of placing a [Block Debuffs], buff on this Champion for 1 turn when [Stun], [Sleep], [Fear], [True Fear