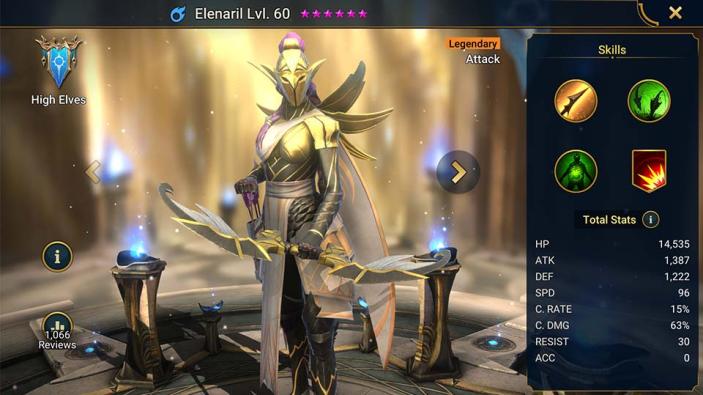 Elenaril has the ears and the bow of an elf and she strides around in her glowing golden armour. Elenaril has an HP burn on her A1 that cannot be resisted and an AOE poison and poison explosion!

Elenaril needs a strong setup, champions such as Taurus, Tomb Lord, Richtoff the bold also capable of placing multiple poisons out on multiple enemies that Elenaril can explode for massive damage.

Elenaril is very powerful for Dragon, Agreth, and Sorath in the right setups! She is also good against Kuldath the Magma dragon provided you run a speed explosion comp. Do not let her A1 HP burn the dragon as you will take a lot of damage throughout your team!

Elenaril’s poison explosion ability requires zero accuracy and no attacking stat increases the damage. The damage is purely based on the number of poison stacks that are active!

In January 2021 Elenaril was changed to never explode poisons on the Clan Boss on auto making her viable. She is still behind a lot of the epics and rares is overall poison output though.

We recommend you use these blessings for Elenaril.
Team Blessings should be limited to 1 per team. For more information, please read our Team Blessings guide here.