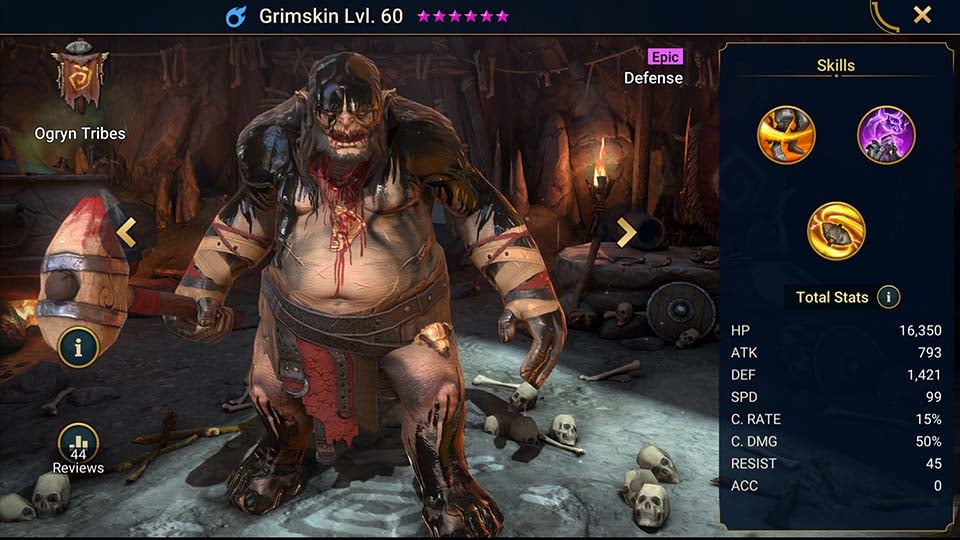 Covered in a mysterious black substance from head to toe, it appears even the fellow members of the Ogryn Tribe have ridiculed Grimskin for his uses.

With Grimskin being Defense-based it does make him easier to keep alive than many Champions, but unfortunately, his kit lets him down, whilst on paper, he does bring some valuable debuffs, and potential of doing decent damage – they don’t synchronize well nor serve a key part of any content.

Grimskin has a [Decrease SPD] debuff on his A1 on a single target, with a 50% chance to land, which serves well in Fire Knight and Spider, but with it only being a single-hit ability it does lose value in Fire Knight as it won’t help much towards breaking the shield.

Outside of this, Grimskin has a [Provoke] on his A2 which would be much stronger if it was an AOE provoke, instead of only having a small chance to land on all enemies.

The same goes for Grimskin’s A3, It only removes one buff from each enemy, so there are many stronger options.

We recommend you use these blessings for Grimskin.
Team Blessings should be limited to 1 per team. For more information, please read our Team Blessings guide here.

High Awakening This blessing benefits more from 5 or 6 star awakening compared to other blessings.