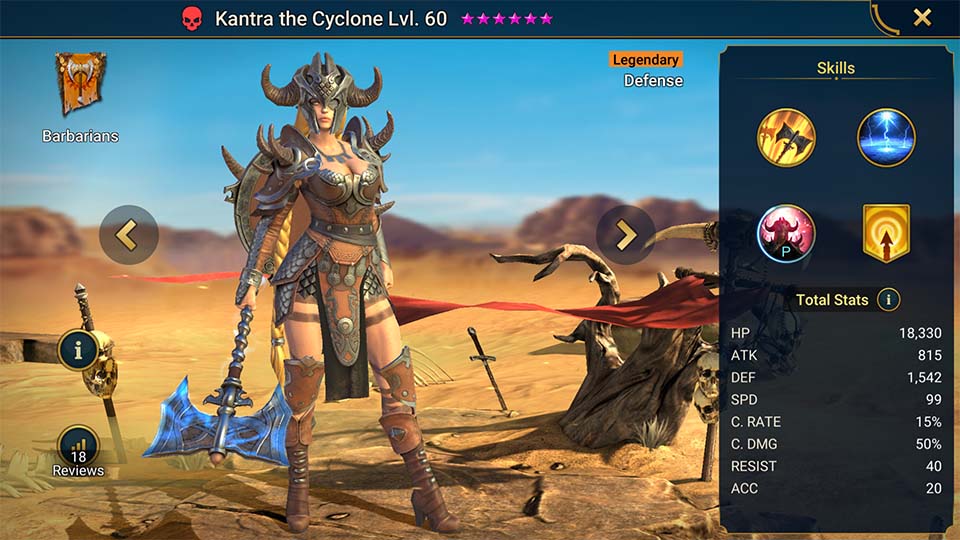 Kantra the Cyclone is a Force affinity legendary from the Barbarian faction. Kantra was introduced as one of the most achievable fusions ever offered by Raid, utilising epics and rares already available to the player base. Many people fused Kantra on the day she was released.

Kantra excels at debuffing enemies with an A2 capable of landing multiple debuffs at the same time. She also had a fantastic passive ability to heal every time a debuff wears off on an enemy making her one of the best tanks in Raid.

Kantra can offer some utility in Doom Tower able to play in every fight without a fear of affinity due to her unique ability to land debuffs even on weak hits. She is also one of the best champions in the game to deal with the head of Decay in Hydra being able to reliably land a provoke on it every time she takes a turn providing there are enough debuffs already present.

Decreases each enemy’s ACC by 10 for each debuff they are under.

This champion will receive 4% less damage for each debuff on the attacker. Heals this champion by 1,250 HP each time a debuff expires on an enemy.

Has a 75% chance of placing a Provoke debuff for 1 turn on enemies under 5 or more debuffs at the start of this champion’s turn.

This champion can place debuffs on weak hits.

Increases Ally ACC in all battles by 60.