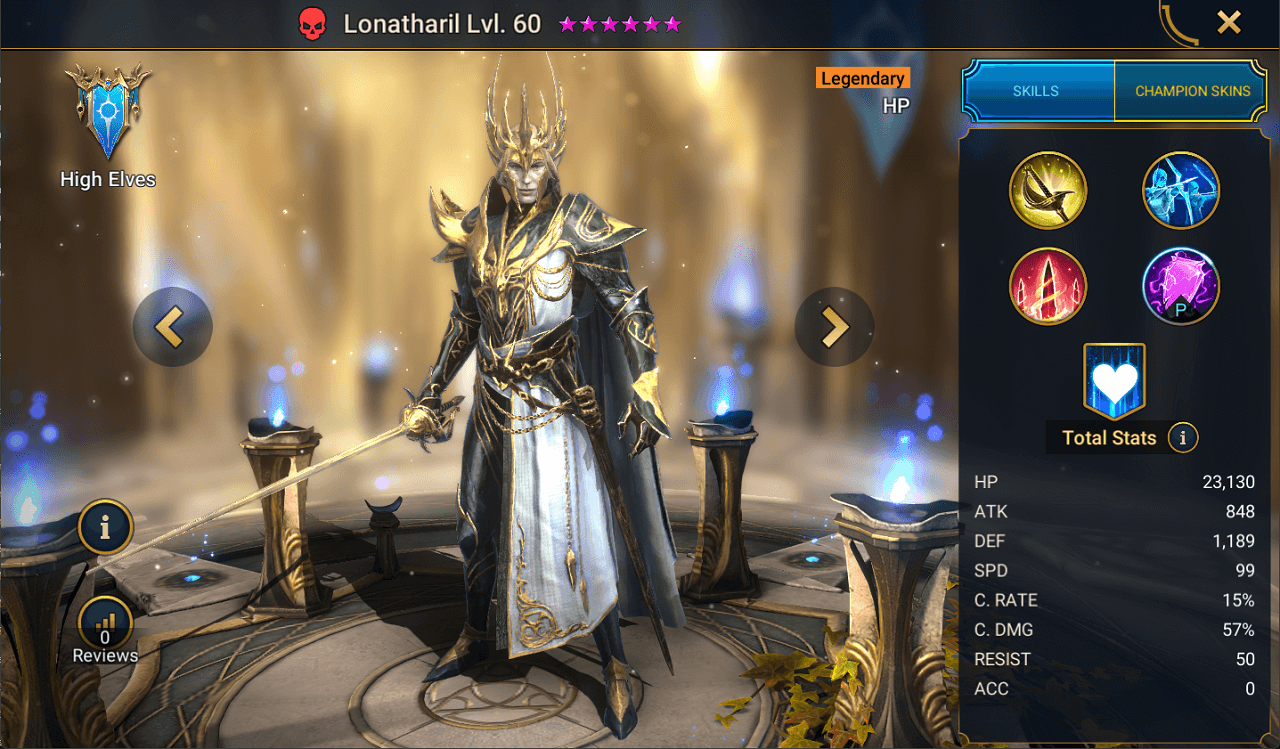 Lonatharil was the August Fusion of 2022, he was a Fragment Collector / Traditional Fusion – meaning you’d have needed to gather Fragments for 4 individual Epics, before fusing him.

Lonatharil is a Champion that will help as a support unit but ultimately is fairly weak compared to other legendary champions and feels one-dimensional!

With his A1, he attacks one enemy, decreases his MAX HP by 30% of the damage inflicted, and shields your most injured ally. This skill will help you fight against Scarab King as the skill itself has a “built-in” Destroy set.

With the help of A2, Lonatharil attacks all enemies and shields your team for 3 turns. If any of your allies are dead, Shield can be removed neither by enemies nor by allies like Seer. This skill will once again help in fights against Scarab King and Demon Lord as 3 turns Shield will basically have your team permanently protected.

Lonatharil’s A3 allows him to buff the team with Increase C.DMG and then team up with all allies to attack a target enemy. If you don’t have a good ally attack Champ yet, Lonatharil will be of great help in fights against Demon Lord (to up your damage there) and in a bit out of meta but still fun blender teams in Arena.

With the help of the Passive skill, Lonatharil deals more damage to enemies under Shield.

On top of that, he has a high HP Aura for Doom Tower battles.

He can be a good champion for Hydra if you need that person to step up its Lonatharil!

Attacks all enemies. Places a [Shield] buff on all allies for 3 turns equal to 20% of this Champion’s MAX HP.

If there are any dead allies, places a [Shield] buff on all allies for 3 turns equal to 30% of this Champion’s MAX HP instead. This buff cannot be removed, stolen, transferred, spread or have its duration increased or decreased by enemies or allies.
Level 2: Damage +10%
Level 3: Damage +10%
Level 4: Cooldown -1
Level 5: Cooldown -1

Places a 30% [Increase C.DMG] buff on all allies for 2 turns, then teams up with all allies to attack a single enemy.
Level 2: Cooldown -1
Level 3: Cooldown -1