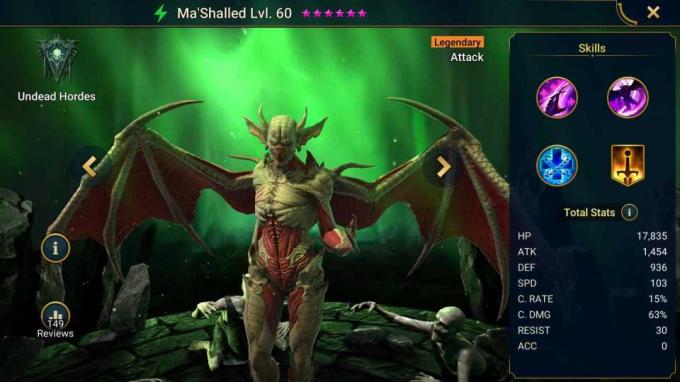 Often considered the original vampire that sired a thousand children, Ma’Shalled is considered a god amongst the undead, avoided by most in fear of his wrath that comes fast and deadly.

Ma’Shalled is a Spirit affinity Legendary champion in the Undead Hordes faction. Widely known as a vault lord until he got a HUGE buff in April 2020. Now he has become a top15 legendary and a GOD of arena offence with high damage potential and great enemy control through True Fear. Ma’Shalled will speed your team up whilst applying crippling debuffs to the enemy team.
Ma’Shalled in a great champion in all content if paired with the right champions. His leech ability enables you to use him in a Clan Boss team without the rest of your team needing to run Life Steal gear. He is also used in the famous white whale team allowing your team to go on a 2:1 speed versus clan boss ensuring maximum number of hits.
In any dungeon provided you have enough accuracy to apply your debuffs he can control enemy waves for your team.
With the arrival of Hydra Clan Boss Ma’Shalled spiked in value again as one of the best damage dealers against these deadly Hydra heads. His A1 will hit all enemies with a leech debuffs but it counts as single target hits and therefore bypasses a lot of the hydra passive abilities to reduce incoming AOE damage.

Increases Ally ATK in Dungeons by 34%.