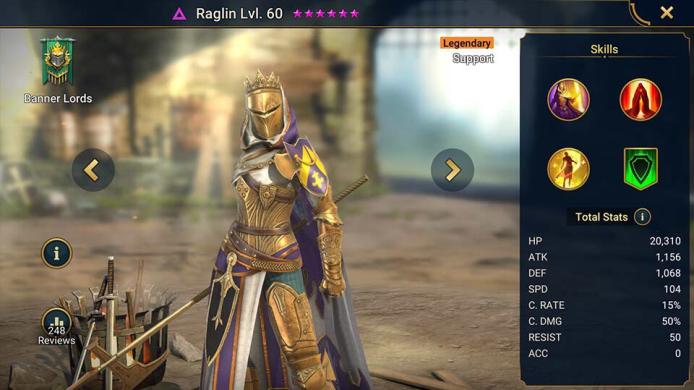 Raglin has a Gold-Plated armour set which is fitting for a Queen! She doesn’t use that weapon of hers often because she is such a god-tier support champion!

Raglin has the best revive mechanic of any champion in Raid: Shadow Legends, capable of booking to just a 2 turns cooldown. Due to her amazing revive ability and other support mechanics such as team heals and turn meter boost Raglin can be formidable anywhere in the game. It may be single target but it is the most HP revive in the game and with full Turn Meter!

Raglin holds Goddess status in Faction Wars. She benefits from high speeds, high defence, HP and attack. Although Raglin can hit fairly hard, her only damaging skill is her A1 therefore I wouldn’t prioritise crit in her build.

She is great in arena defence with the same stats as above because she is such a pain to deal with then a short revive makes it really annoying!

She is great in all areas of the game as her a2 cleanses and heals to get rid of all the pesky debuffs.

Increases ally DEF in all battles by 33%

General PvE
Team Support
Offense
Defense
Support
Offense
Defense
<img title="Cycle of Revenge - Has a 50% chance of increasing the Turn Meter by 15% when an ally is attacked with a critical hit. Will only increase the Turn Meter once if an ally receives multiple critical hits from a single Skill" alt="cycle-of-revenge" class="lazyload ignore-lazy" src="data:image/gif;base64,R0lGODlhAQABAAAAACH5BAEKAAEALAAAAAABAAEAAAICTAEAOw==" data-orig-src="https://hellhades.com/wp-content/plugins/rs