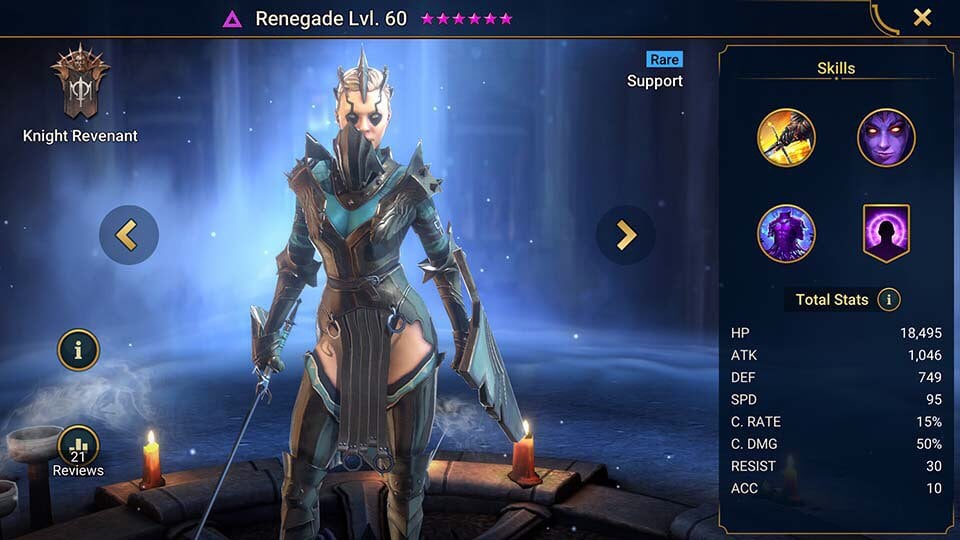 Renegade is a Void affinity rare from the Knight Revenant faction. Renegade is best known for end game speed farming with an ability on her A3 which reduces the cooldown of all of your teams skills by 2 turns. When paired with big hitters such as Royal Guard or Coldheart she can reduce the cooldown of their Max Enemy HP abilities and allow them to nuke again faster!

This leads to her best place in Raid being Dungeons. She can speed up times in Spider, Dragon and Ice Golem and Fire Knight significantly but it takes the right team set up.
Generally Renegade will need to be the slowest on your team to get the resets after the main abilities have been used.

Decreases the cooldown of all ally skills by 2 turns. This skill does not affect this champion, or other champion’s with this skill. This champion will receive damage equal to 30% of their MAX HP. This will happen even if it kills the champion.
Level 2: Cooldown -1
Level 3: Cooldown -1

Increases Ally RESIST in all battles by 40