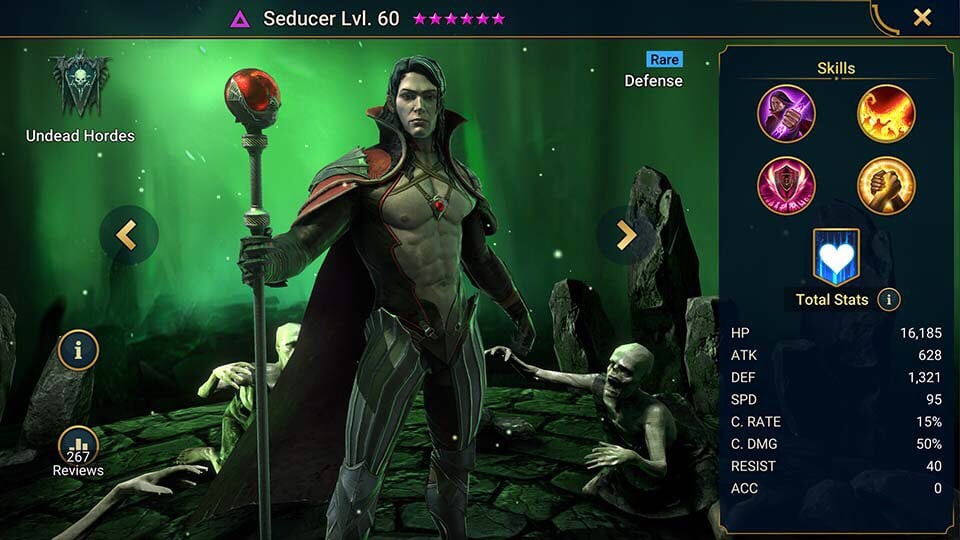 Damn this is one sexy dude! Seducer is a Void affinity champion from the Undead Hordes and can offer team utility in almost all content in the game due to a 4 turn cooldown Block Debuffs on his A3. This ability will prevent your team from taking the worst debuffs dished out by the Dungeon, Faction Wars, and Doom Tower bosses. Seducer also has an AOE decrease attack debuff on his A2 that can reduce the damage your team will take from dungeon waves. Seducer is a defence based champion and therefore easier to keep alive and possible to make into a tank to help keep your damage dealers alive.
Make sure you build him with enough accuracy to land his debuffs and a healthy amount of speed and defence. It is also possible to build Seducer in a Stun set for additional crowd control.

Seducer has enhanced abilities when paired with Temptress from the same faction. This is fairly rare within Raid.

Places a 50% Ally Protection buff on all allies for 2 turns. Places a Block Damage buff on this champion for 1 turn. Only available when Temptress is on the same team
Level 2: Cooldown -1

Increases Ally HP in all battles by 25%

We recommend you use these blessings for Seducer.
Team Blessings should be limited to 1 per team. For more information, please read our Team Blessings guide here.