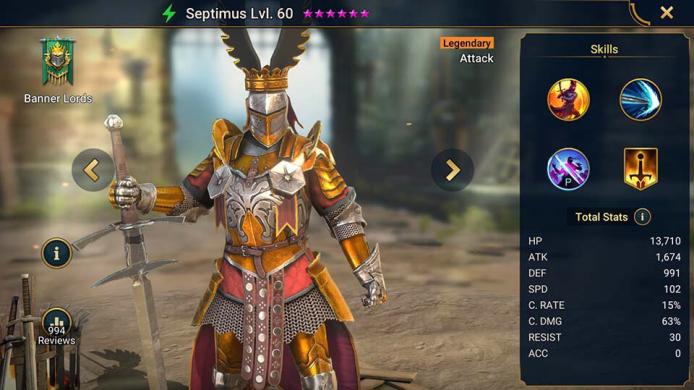 Septimus is the Golden boy in the Banner Lords faction with the gold-plated armour, you know it is Septimus when he walks through the door. Septimus has an a2 which is based on the enemy’s MAX HP therefore he will smack bosses.

Septimus has the Biggest NUKE in the game until you hit stage 21 content then he gets capped but he still Smacks like a runaway train!

Septimus holds world record runs in Spider, Ice Golem and now Doom Tower and continues to be one of the most fun legendaries in the game.

He shines the most in Spider and Clan boss because he will just blow the Bosses up with his a2!

Septimus masteries change a lot depending on your use of him! If Clan Boss you want Warmaster and accuracy so offence and support. Outside of Clan Boss my selected is for high burst damage hits but you may prefer Flawless execution over Helmsmasher for consistent damage.

Each attack has a 30% chance of increasing the duration of all debuffs on the target by 1 turn. Damage inflicted by each attack increases by 30% if the enemy’s current HP is over 50%.

Increases ally ATK in all battles by 23%

General PvE
Max HP
Offense
Defense
Support
Offense
Defense
<img title="Cycle of Revenge - Has a 50% chance of increasing the Turn Meter by 15% when an ally is attacked with a critical hit. Will only increase the Turn M