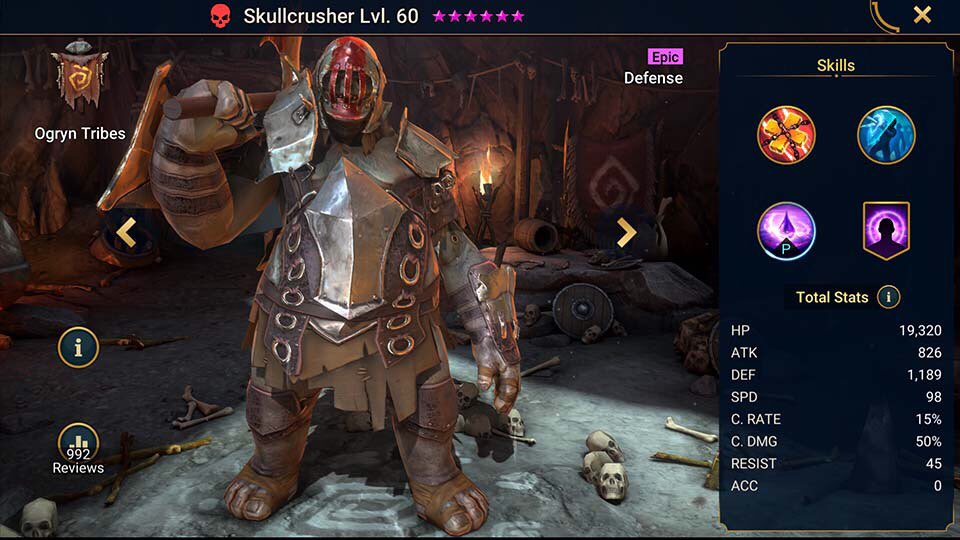 Skullcrusher is a Force affinity epic from the Ogryn Tribes. He is the only epic buff your entire team with [Counter-Attack] and is therefore one of the most sought-after champions in Raid: Shadow Legends.

This buff is one of the tried and tested techniques to enable a huge amount of damage against the Clan Boss. The Clan Boss is the best area in the game to earn Shards and skill tomes/books. There are only two other champions in Raid: Shadow Legends with a full team counter-attack and they are Legendary champions – Martyr and Valkyrie.

Skullcrusher also applies an [Ally Protection] buff to the team and [Unkillable] buff to himself when the [Counter-Attack] buff is placed meaning he adds even more utility and enables your team to stay alive much longer into fights.

Skullcrusher is also strong in Fire Knight and Faction Wars right into the end game and will be in most people’s mid-game teams in all content!

Decreases the duration of all debuffs on this champion by 1 turn at the start of each turn.

Clan Boss
Standard PvE
Offense
Defense
Support
Offense
Defense
<img title="Cycle of Revenge - Has a 50% chance of increasing the Turn Meter by 15% when an ally is attacked with a critical hit. Will