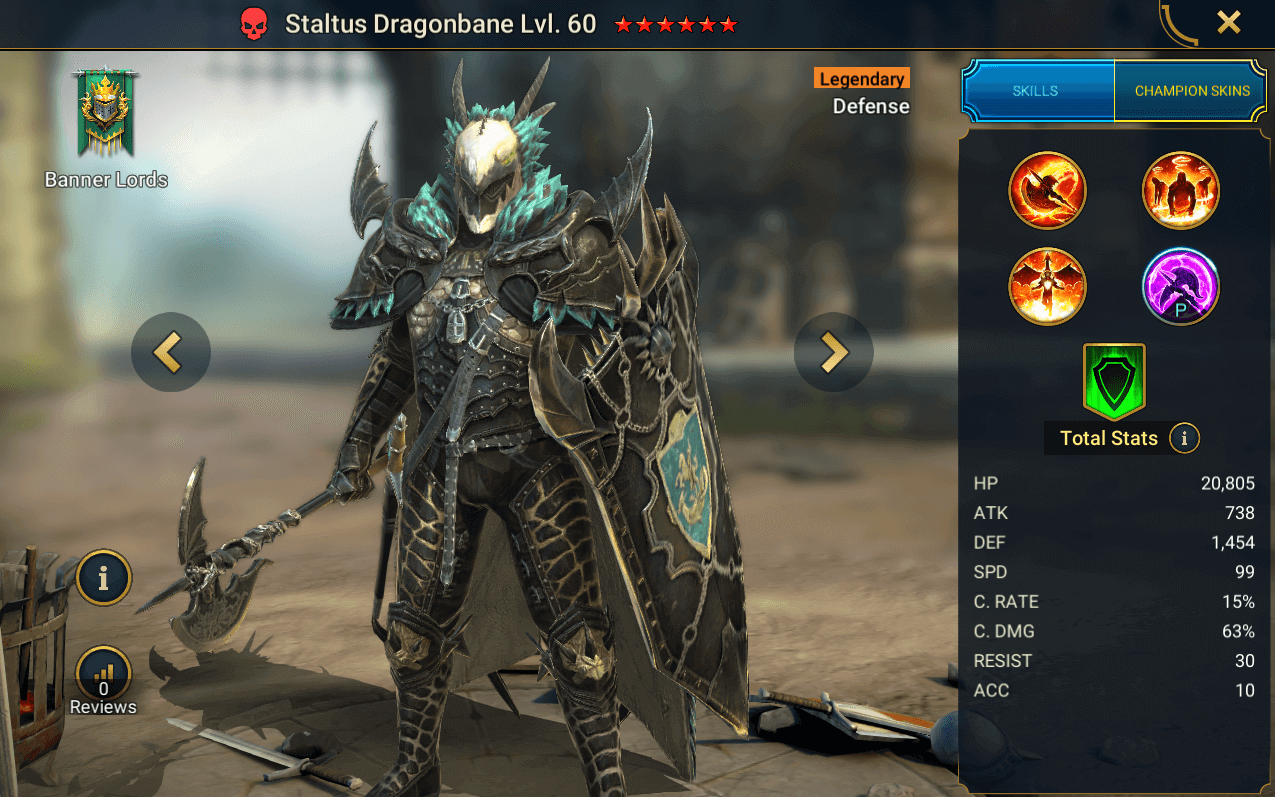 Teleria has Dragons?! Staltus Dragonbane brings the mysterious creatures to the Banner Lords faction as part of patch 6.0. He has taken Dracomorphs head and is using it as a helmet, if that isn’t a statement and a half I don’t know what is!

It has taken some time but finally Soulless has been dethroned as the best defense based damage dealer in all of Teleria. Whilst Soulless A3 might hit slightly harder, the rest of Staltus abilities produce more damage. It all is driven from the passive which increases Staltus damage by 5% for each debuff on an enemy target. He brings 2 AoE abilities (normally essential for arena which often requires another nuke) both of which hit extremely hard. On the A3 he’s able to provide his own Increase Defense buff meaning you are not required to bring a Siphi or Doomscreech and rely on other TM boosters for your speed team. Additionally his passive makes him immune to any Poison, Decrease Defense or Weaken which makes him especially good for Dragon and Agreth, the Nether Spider.

Damage Aside, Staltus brings a great deal to your team. His A2 has a 50% (75% booked) chance per hit to Stun almost guaranteeing this will land over 2 hits. This a2 is massive for dealing with the Spider’s Minions because you can just stun them up and have done with them for a turn. He has a 20% Decrease Turn Meter on the A1 on any target under a debuff. His a3 debuffs are less useful as its conditional on the target and Decrease Critical Damage will be used more often than not where the Decrease Speed would be more desirable.

Whether you are looking for a big Defence based Nuke, solid crowd control for waves or a just a cool looking dragon fire breathing animation (yes he summons a dragon!), look no further than Staltus Dragonbane.

Places a 60% [Increase DEF] buff on this champion for 3 turns, then attacks all enemies.

Whenever an enemy attempts to place a [Weaken] debuff, a [Decrease DEF] debuff, or a [Poison] debuff on this champion, reflects them back onto the attacker.
Damage increases by 5% for each debuff on the target.