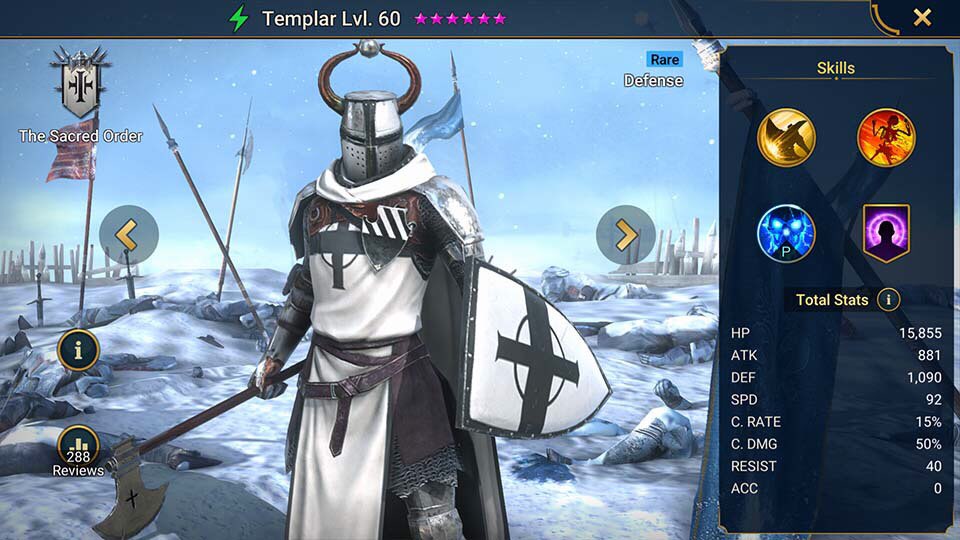 Templar used to be annoying rare you’d face on some waves due to his annoying choice to provoke your champs and place block damage. Otherwise he became food for your more powerful epic and legendary champions. That was until the release of Bommal, the Dreadhorn as part of the new bosses in Rotation 3 of Doom Tower.

Templar’s unique ability to self-buff with Block Damage meant you could avoid the dreadbomb damage and therefore allow him to solo the boss (although you most likely will need to manual). You’ll need to run your Templar in both Regeneration and Immortal gear with 70k HP and around 200 speed but this can achieve even the top difficulty with patience.

Increases Ally RESIST in the Arena by 50

Standard PvE
Crowd Control
Bommal Solo
Offense
Defense
Support
Offense
Defense
<img title="Cycle of Revenge - Has a 50% chance of increasing the Turn Meter by 15% when an ally is attacked with a critical hit. Will only increase the Turn Meter once if an ally receives multiple critical hits from a single Skill" alt="cycle-of-revenge" class="lazyload ignore-lazy" src="data:image/gif;base64,R0lGODlhAQABAAAAACH5BAEKAAEALAAAAAABAAEAAAICTAEAOw==" data-orig-sr