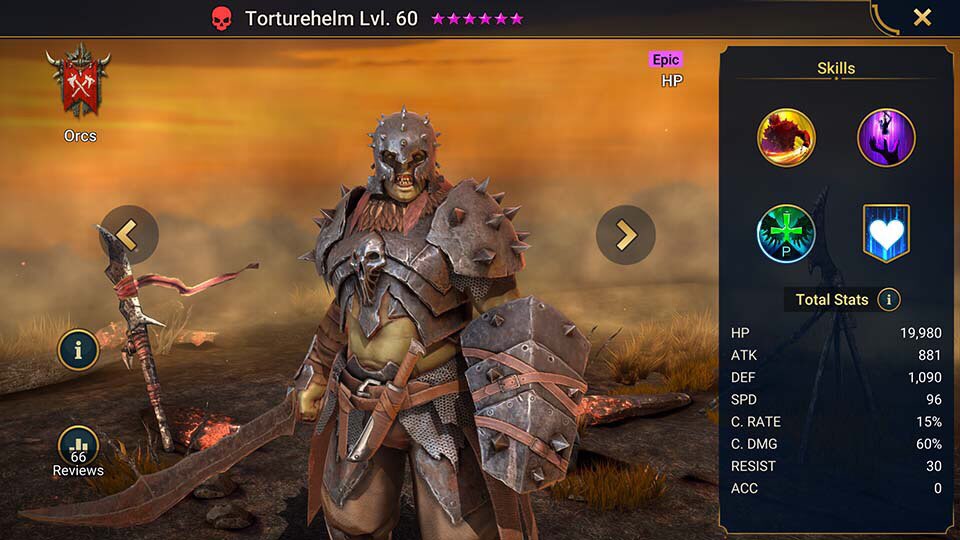 Torturehelm (or Mr Smiles as known by friends) is a Force affinity epic champion from the Orc faction. He has a very unique kit that improves as more people in your team die. There have been some Clan Boss Unkillable teams built using The Tower and Torturehelm where Torturehelm is the stun target and dies, Torturehelm revives on his passive ability and this cycles for 50 turns.
This same tactic does enable Torturehelm to solo dragon 20, please see my video on this before wasting resources as the build is fairly specific!
These has also been Arena teams built around the same passive where the whole team dies and Torturehelm unleashes a lot of damage. These teams are very niche and Torturehelm has no place in general content unless teams are built around him.

Torturehelm is also an epic that forms part of the permanent legendary fusion Rhazin Scarhide considered as a top tier legendary.
Torturehelm can be fused by combining 4 rares, Skullsworn, Halberdier, Spikehead and Theurgist.

Revives this champion with 50% HP when killed.

Increases Ally HP in Dungeons by 33%

Nuker
Solo Drag 20
Offense
Defense
Support
Offense
Defense
<img title="Cycle of Revenge - Has a 50% chance of increasing the Turn Meter by 15% when an ally is attacked with a critical hit. Will only incre