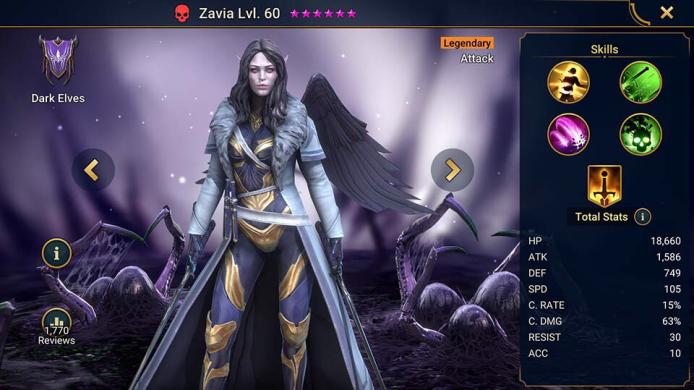 Zavia is a Force affinity Legendary from the Dark Elves faction. She is a fantastic Legendary however relies on a strong set up to really shine.
Zavia is best known for her Deadly Catalyst ability attacking all enemies and blowing up all poisons at once to do huge amounts of damage. This makes her extremely strong for running through endgame dungeons very fast when paired which teammates who place a lot of poison on all enemies. Good examples of some champions to pair her with are Taurus, Tomb Lord, and Richoff the Bold.
Deadly Catalyst requires zero accuracy and no attacking stat increases the damage. The damage is purely based on the number of poison stacks that are active!

Is the mastery section this build is based on her running PVE content outside of Clan Boss. Her Deadly Catalyst will not blow up all poison on the Clan Boss for all ticks of damage and therefore it is fairly ineffective. In January 2021 Zavia had her auto AI fixed to ensure Deadly Catalyst will not activate against Clan Boss making her stronger in this area of the game. If you choose to run on Clan Boss you will want to choose a Giant Slayer tier 6 mastery.

Overall Zavia is an endgame capable of large spikes of damage and speedrunning dungeons. She is also very strong in the arena as she has a block revive.

Attacks 1 enemy. Applies a Debuff Spread effect, taking 4 random debuffs from the target andplacing them on all enemies.
Only available when Belanor is on the same team

Increases Ally ATK in all battles by 33%