With the new SSS Healer, Botta, added to the game, it makes sense to test her versus our “OG”single-target healer, Serena. There’s not a lot of healers in the game yet (only 4 total as of now), so either way, you’re likely going to want to build both for your account at some point. However, is Botta worth the resources? Serena is a non-SSS so a lot easier to build and max out. She’s even one of the few available for “hyperevolution”. Does Botta outshine Serena? Or does the non-SSS surprise us? Let’s take a look!

First off, on paper, it would seem like it’s an easy win to Botta as a better healer and more utility. She’s a SSS so has a little bit better base HP & DEF so is easier to build. She also brings a buff to all allies to improve DMG. Serena brings an increase to DEF for all allies; DEF being one of the weaker stats in the game so this is likely less impactful. With a comparison like this, we had to test with similar stats, gear, etc. For the sake of the healing test the following was done:

There’s a lot of RNG involved in the storymode runs. For this test, we used a typical lineup that many would use to push story mode, working with both healers in the middle row. The first image here shows the healing done by both when Botta was at the top position. Most heroes died and the run failed a little early. Botta outshined Serena in total healing. The 2nd run we swapped Serena & Botta, leaving Serena in the top position. This run went all the way but failed only due to not enough damage in the time limit. Botta still out-healed Serena in this as well. 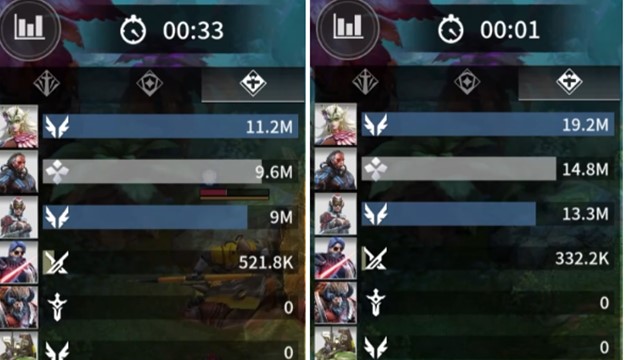 It was also tested having the two heroes separate. The story mode was pushed with Serena as the only healer until it failed. It was then tested multiple times to ensure the failure. After, Botta replaced her and was able to clear the run.

The next test was done in Deesa Caves. We brought in a tank that wouldn’t easily die but also not do much damage to prevent killing the boss. Serena and Botta were tested in a 30-second and 1-minute test. Who can do the most damage within each time frame? Botta, again, proved the victor.

As expected with initial first impressions of a SSS vs a non-SSS, Botta did outshine Serena in healing tests. That coupled with her extra utility of helping to increase ally damage helps to push her further over the edge. However, as noted, Serena is still a very strong unit, especially for non-SSS, and should still absolutely be a maxed-out unit on everyone’s roster. If you don’t have Masrani yet, also consider using them as a double-healer power duo to help get you through tough content, even arena! Check out the video below for the footage and discussion around this testing.