When it comes to gearing heroes in Eternal Evolution, it’s important to put your knowledge from other games aside and be sure to figure out what works best for this game in particular. When you hear “Tank” you probably think high Defense and maybe HP as well, but this game has another stat to consider: Damage Reduction. Also, some of the best heroes to fulfill your Tank role are actually also called Vanguard heroes, but they need something special. First, let’s talk about general gearing tips.

Tanks need a focus on HP% mainly. With rare exceptions, you’ll want to focus the following:

When it comes to overall stat goals, let’s talk about the more “end game” goals so you know what to strive toward. This is considering you’ve Evolved them to Immortal 0. Your goals for all of these tanks will be as follows.

You can see your total stats by clicking on a Hero then clicking on the stats under the Info tab. Do not use the Equipment tab “Stats” list for this reference as that only shows equipment bonuses, not overall for your character + other factors. 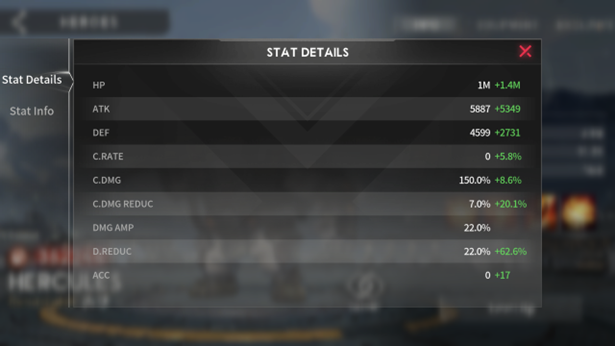 When it comes to using Vanguard heroes as tanks, it’s often necessary to pair them with a Prism Amulet. This dramatically increases their survivability. Please note this is not an easy one to get and can be found through special events but not farmed via Terra Dome.

Which Tanks / Vanguards should you use?

He’s a top-tier SSS hero that can pump out some damage but can be best used to fulfil your tank role. Even though he’s a defense-based damage dealer, you’ll want to stack HP% on him instead of DEF% and build him just like other tanks. Ideally, you’ll want a Prism Amulet for Crete, with it, he’s the best tank in the game. However, he does have great base stats for a non-tank class and can do the job well without. He also reduces the enemy’s DEF, a great skill to have in any team.

They’re all strong non-sss heroes that can help get you through content. Out of the 3, Oisa would probably be noted to focus last. Even though some of their kits include shields, it’s best to put full HP% sets on them if possible.

She’s an SSS but not top tier overall. While she is a strong tank, she’s not to the level where you’d focus her with your resources over other SSS heroes first. If you do get your roster well developed and start to focus her, she’s a good candidate for a Herald (Shield) set with strong focus on HP% still otherwise.

Both of these Vanguard heroes sound like they’d be fun Defense based damage dealers but in the end, they’re just not quite up to par with the other damage dealers in the game. However, you can take advantage of them both as Tanks if you happen to get your hands on a Prism Amulet Divine Prototype. Like the others, focus HP% primarily when gearing. Otherwise, it would not be suggested to use them as the only tank in your team, but possibly as a secondary front-line tank or a mid-lower tier damage DPS.

They’re both bottom tier compared to the other tanks options in this game. However, you may find use for them early-mid game as you progress, especially in the Faction-specific Soul Mine.