How to Gear Energy Heroes

How to Gear Energy Heroes

When it comes to gearing heroes in Eternal Evolution, it’s important to put your knowledge from other games aside and be sure to figure out what works best for this game in particular. The Energy class of heroes makes up for a variety of interesting heroes. For the most part, it’s what you’d think of a “traditional damage build”. However, there’s one exception we can start with…

Luke is a top tier pick for a SSS to focus on. He brings strong AoE damage and a Decrease Defense skill that helps enable everyone on your team to do more damage. Because he has a talent that changes his Ultimate to deal “True Damage” and not be able to crit, most people build him with a full focus on ATK %, not bothering for C.RATE & C.DMG. However, an alternative build could be to decide not to take that upper section of Talents and avoid activating that part of the skill. Then you could build more traditionally and a strong focus on C.RATE & C.DMG.

When it comes to overall stat goals, let’s talk about the more “end game” goals so you know what to strive toward. This is considering you’ve Evolved them to Immortal 0. Your goal for all of total stats will be as follows.

These heroes have similar stat requirements, more like a typical damage dealer – C.RATE, C.DMG and ATK will be the focus. Obviously, the SSS heroes will have better base stats and easier to build for maximum damage. Nadilus is top tier for many areas of the game, dealing strong single-target damage. Ravenna is an absolute PvE AoE damage-dealing monster. She blows everyone out of the water for longer fights, especially when being boosted by Rez and paired with good AoE Decrease Defense like Luke or Crete. She’s an absolute must to excel in Scythe Spider and Twilight Lands higher levels. Sorietta excels where single-target damage is needed and is one of the best non-sss heroes in the game. Falvea is a strong non-sss who can flex for single-target or AoE Damage. Kain and Nagrama also deal solid damage for non-sss, both originally coming from Rise of Heroes events.

Poluno, Murphyro, & Omar are a bit more mid-tier as an AoE damage dealer but will really excel early on.  Orn & Kar’Maw are at  the bottom of the totem pole here and should only be built only to help squeeze out extra damage in Twilight Lands, in Faction Abyss or if multiple copies are pulled early on and used temporarily. With content like Twilight, you can never have too many heroes. So even the “lower tier” are still viable to help get you through. Gear can even be moved around for free so that can help if you’re open to gear swaps. When it comes to gearing,for all of these heroes, you’ll want to focus on:

When it comes to overall stat goals, let’s talk about the more “end game” goals so you know what to strive toward. This is considering you’ve Evolved them to Immortal 0. Your goals for all of these heroes will be as follows.

Note: You can see your total stats by clicking on a Hero then clicking on the stats under the Info tab. Do not use the Equipment tab “Stats” list for this reference as that only shows equipment bonuses, not overall for your character + other factors. 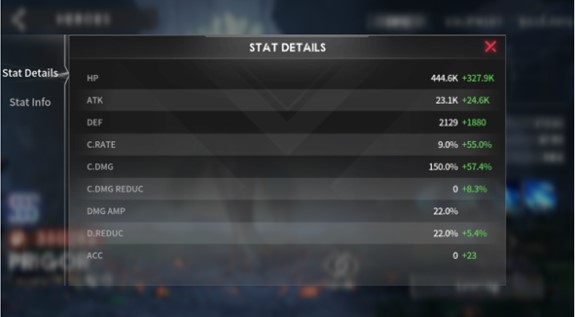