Edit: Since making this post the full patch notes have been announced, you can see them here.

Although initially off to a slightly rocky start with the in-game monetization, this week players of Diablo Immortal will get their hands on season 2 of the battle pass.

Since the launch of the game, last month players of Diablo Immortal have been progressing their accounts through the monthly battle pass with Season 1 due to come to an end on July 7th, 2022.

What is a battle pass season?

Battle Passes are very common in mobile games, they are monthly events that usually offer a free and paid progression path that keeps players progressing and playing the game to reach the rewards at the end. In Diablo Immortal the first seasonal battle pass offered many rewards and bonuses to get you started progressing through the game both as a free-to-play and pay-to-play player.

These Battle Pass Seasons offer items, such as legendary loot, crests for farming legendary gems, and cosmetics to improve the feel of your character in the game. Traditionally players who pay to pick up these battle passes will be able to flex later down the line with the cosmetics that they picked up in the early stages of the game, as once the Battle Pass is over, you will no longer be able to acquire these cosmetics in the game.

When is battle pass season 2 coming?

Battle Pass Season 1 in Diablo Immortal is due to come to an end on July 7th with season 2 expected to be released immediately after, it is very rare that there is downtime between battle pass events and it is very common for mobile game developers to take this window as an opportunity to apply patches to the game.

What will be coming in Diablo Immortal Season 2?

Although we are still waiting for information on what will be coming in Diablo Immortal Battle Pass Season 2 there are a few tweaks to the game that we would like to see implemented to improve the overall experience.

Along with these improvements, overall we were pretty happy with the general progression and rewards that were given from the Season 1 Battle Pass, and the price for the premium version of it, when compared to similar games, was very reasonable. Yes, I understand PC players will not be happy that I said that, but, when you compare it to other mobile games, the price of the battle pass in Diablo Immortal vs the rewards that it gave was actually pretty solid. 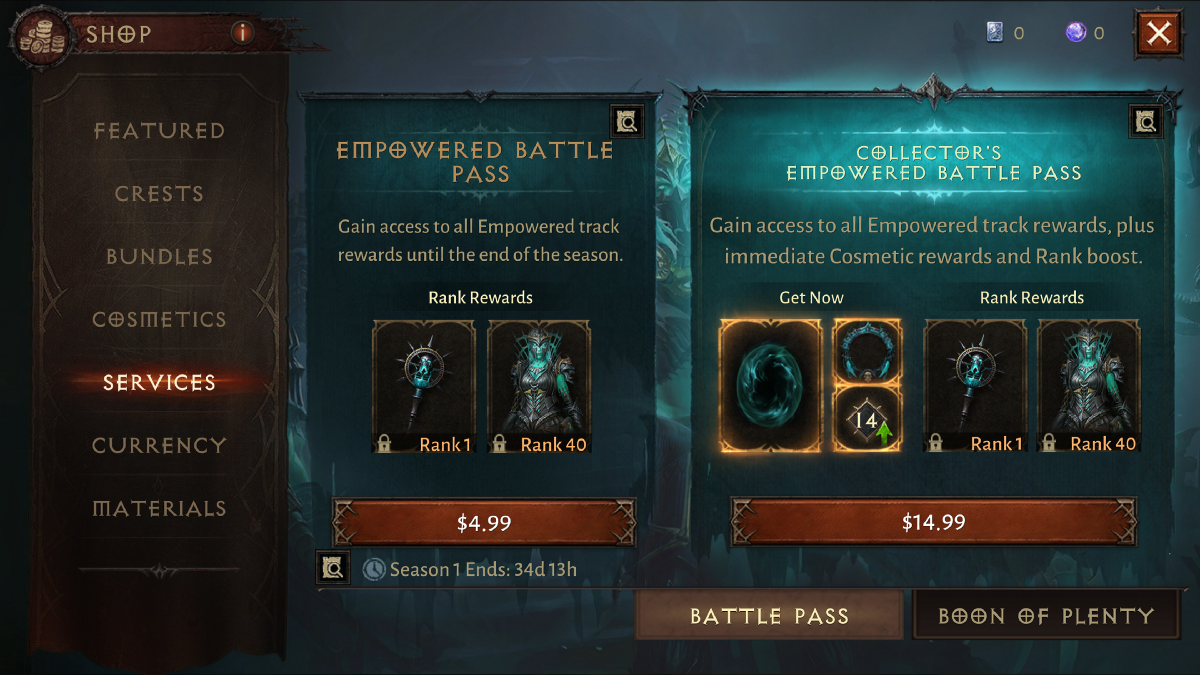 How much will Diablo Immortal Season 2 Battle Pass Cost?

We do not have a confirmed figure at this point, however, it is likely that the battle pass will cost the same amount as season 1, with the basic pass costing $4.99 and the premium version priced at $14.99.

When will we know what is in Season 2?

We don’t know exactly, but as soon as we know the details of what will be coming in Battle Pass Season 2 of Diablo Immortal we will update this page with a link to the full list of patch notes.

We have had a small update about the Season 2 launch in Diablo Immortal. PezRadar of Blizzard Entertainment put out a post on Reddit that we will not be getting the full patch with the Battle Pass Season 2. It looks like this patch will come later this month and include some of the things that the community has been talking about. However, we will need to wait a couple more weeks for it.