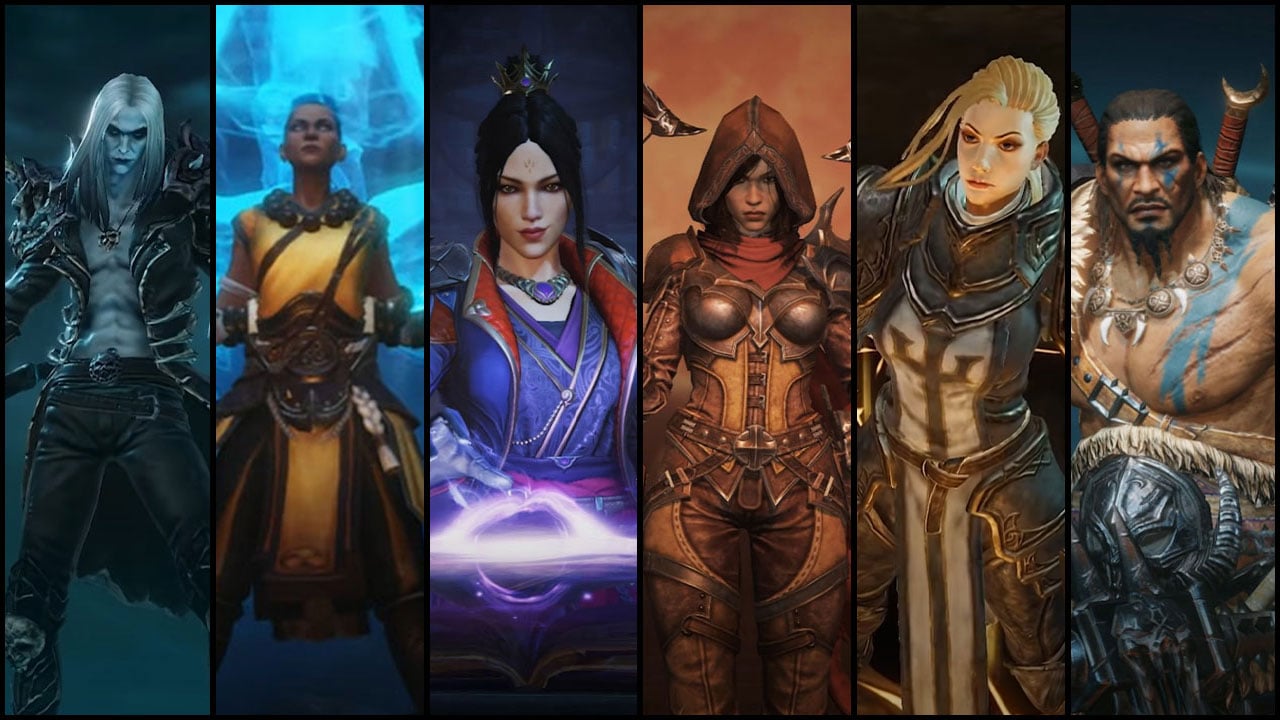 Today we’re going to have a little look into each of the Diablo Immortal Classes, to help you make the right decision when starting the game.

With there being 6 classes in the game, and all of them being very viable and strong in all areas of content, it’s very hard to decide on exactly what you want to commit your playtime to.

Of course, certain classes are stronger than others in different aspects of the game, and we’ll take a little look into that today too.

Picking the right class for you should not come down to the strength of the class, as the balance is relatively well done in Diablo, however, some of them are much harder to play than others.

Here’s our overview of each of the classes available on launch.

Barbarian will likely be the most used class in the game, it is incredibly user friendly with high AOE attacks, which makes them great for farming both solo and in groups, you’re able to hoard enemies and chain massacre kills for huge XP boosts much easier than you’re able to on other Classes.

Barbarians also have great crowd control which is vital due to them being up close and personal with enemies at all times. Barbarians are also amazing in groups because of the buffs they bring to your party, which will see them being very sought after – however due to their popularity this will likely not be a problem to find one.

In terms of PvP – Barbarians may well be the BEST class for it, due to their passive Cheat Death and huge mobility and damage, they will truly give other classes a headache while pummelling them to death.

Demon Hunters have the highest Single Target Damage in the entire game, making them huge for PVE and great for soloing content. Demon Hunters are almost a necessity to any group content if you are looking to speed farm.

Demon Hunters are able to move around while using their abilities which makes getting into a safe position while annihilating your enemies with Multi-Shot very possible, which due to them not being very sustainable when getting hit, is key!

Unfortunately, Demon Hunters do not have any crowd control and very limited mobility which makes them very squishy, especially in PVP – However if they can hold back and damage from afar they will be able to tear apart enemies still, just like in PVE.

As you can imagine, Monks use their fists as their weapons and sport some of the best movement abilities in the game, making them extremely fast and able to stay out of harm’s way. Monks bring a TON of crowd control and support buffs but are lacking on damage when you compare them to the top dogs.

Monks offer the best group support in the game, making them very viable in both 4 man and 8 man group content.

The Skill cap for playing monks is rather high due to relying on combining certain abilities to make the most of their skill kit.

Monks have very low cooldowns, making their APM very high and all in all making them a very fun and engaging class to play.

Wizards are a ranged class that has tons of very strong AOE damage and significant crowd control skills, it’s not a very beginner-friendly class and is widely considered to be the hardest of all to master due to having to combo their spells in order to maximise the damage output.

Wizards have both long and short-ranged abilities which allow you to build into a style that suits you most.

The Blackhole can group tons of enemies together allowing you to annihilate them with your other abilities.

Wizards have some of the best mobility in the game with their ability to teleport around which will help them to escape danger easily, however, they more often than not will have to stand still while casting their abilities.

Another Fan favourite, if you like summoning pets and like the idea of controlling the undead, look no further, this will likely be the class for you.

Necromancers are a ranged class and arguably the most beginner-friendly of all. Sporting huge AOE and Single Target damage makes them one of the best solo classes in the entire game.

Necromancers have great crowd control and group support skills which allow them to be a very versatile class and can fill any role on the battlefield.

In PVP – Necromancer is fantastic because of the ability to stun, however with the range on Necromancer attacks being quite small it can put you in harm’s way trying to make the most of some of these abilities, which can be problematic due to low mobility.

Because of their mobility, they are fantastic scouts, which makes them almost mandatory in group content, allowing them to gather enemies up for your damage dealers to tear through them with their AOE skills.

Crusader also brings some of the best buffs in the game to your party, with Holy Banner – Increasing Critical Rate to 100% for your entire team,

In PVP, Crusaders are amazing at closing down on enemies, it will be near impossible to escape the clutches of a Crusader while he’s on his pony. However, outside of your Draw and Quarter window, you may find it problematic while trying to close the gaps to enemies.