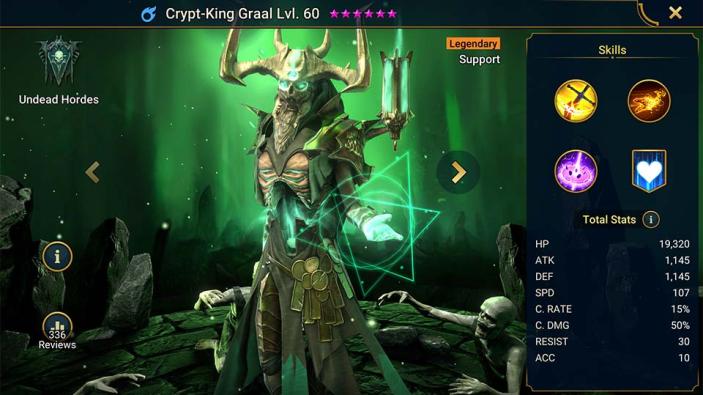 The king of the Undead he only fears one of the horde – Bad-El-Kazaar, often considered the first of the Undead. In the past 1,000 years the Crypt King went into hiding looking to master the power of Ice and Fire. Now he is feared by all!

Crypt-King Graal is one of those champions that for a very long time was a vault lord due to his kit being dated and difficult to use. When Dungeon 21-25 difficulties were released, Graal was able to join in with the Spider 25 speed farming but it was really Sicia Flametongue that was doing all the work.

In Patch 4.70, the Crypt-King went from a vault lord to a Telerian God! His A2 is now a 100% AoE HP Burn. This enables his A3 to be a 100% AoE Freeze and extend the burns making him probably the strongest HP Burner in the game and the best for Spider 25. His A1 also is now a 100% Decrease ATK when a HP burn or Freeze is present making him super reliable against bosses in Doom Tower (where you generally burn them down) and against Clan Boss.

With a strong Base Speed and good HP and Defense, You can put Graal in any team and watch him do some work. Certainly the Strongest set of buffs in the patch.

Increases Ally HP in all Battles by 33%