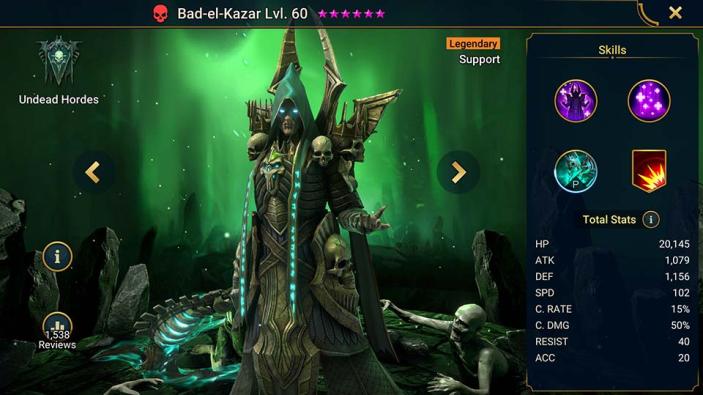 Solo farmer for dragon and keeps!

Considered by many as the original Undead in the world of Teleria, Bad-El started to build his horde working his dark magic on hounds before moving onto the bones of cadavers. Death Knight was his biggest regret expecting a knight to build an empire with, but getting a complete noodle.

Bad-El-Kazar is a Force affinity legendary from the Undead Hordes faction. Bad-El was the original top tier champion in the game for most of 2019! He remains a fantastic legendary with utility make him relevant everywhere. Bad-El has great base stats, poison and heals on his A2, AOE hits on his A1 which heal as well making him capable of soloing content meant to be faced by teams such as affinity keeps, Ice Golem or Dragon 25! Bad-El also has a passive which activates whenever any poison is on an enemy making your whole team deal increased damage to the target by 20% (this doesn’t affect War Master or Giant Slayer damage).
Bad-El has a lot of options with builds, strong in Stalwart, Reflex, Speed, Perception, Cruel to name a few. Ensure you are moving fast enough to rotate his abilities and that you have enough accuracy to land his poisons. After that focus on HP, Def and Crit rate.

Bad-El-Kazar is still a master in Raid: Shadow Legends and one of the most versatile champions in the game!

All allies inflict 20% more damage against targets under Poison debuffs.

Increases Ally C.Rate in all battles by 25%