The Hydra Clan Boss is one of the most complicated encounters you will face in Raid. It will stretch your account to find specific champions with the right buffs/debuffs in order to take down this beast. What’s more challenging is each champion can only be used once per Hydra Key. This means a total of 18 champions (6 per key) will be required to use all 3 keys. Below you will find our guide to beating this boss (We are currently overhauling this guide so certain content pieces may be missing!)

What is the Hydra Clan Boss?

The Hydra Clan Boss is a new Clan Boss that launched in Patch 5.0 and exists alongside the existing Clan Boss (where everything remains the same). Just like the Clan Boss, you will have a number of keys that you will use to deal as much damage before you are defeated. If your clan deals enough damage you’ll get double the rewards on reset. There are, however, some differences you need to know.

Whilst the Clan Boss is a daily reset, Hydra will instead be a weekly reset and you will be limited to 3 Hydra Clan Boss Keys in that window. This allows you plenty of time to work on champions and develop new ideas. Hydra will also be the first encounter where you can use 6 champions in the same battle however there is one catch, each champion can only be used once per week. That means you’ll need a total of 18 champions for all 3 keys, however you can use Duplicates of the same champion!

Facing the Hydra will be a tough task. There are a total of 6 Hydra Heads each with their own unique abilities and mechanics. In addition they are bringing a number of new effects we have never seen in Raid before. Its a good time to refresh your knowledge on the buffs, debuffs and instant effects by checking our updated guide here. You will face 4 of the 6 heads at the start of the battle, with the 5th and 6th waiting on the side-lines. Both the heads and affinities of each head will rotate monthly. That means you’ll have a month of the same starting 4 heads before it changes up. Each head has its own HP pool and can be decapitated (effectively killed). When this happens, you will have some time to hit the Exposed Neck of the defeated Head dealing boosted damage for a few turns before the head either regrows or one of the other two heads not in rotation grows in its place. This means you cannot forget about the 5th and 6th head in each monthly rotation as part of your strategy. The chance for the Hydra Head to regrow into the 5th or 6th grows as you climb in difficulty.

Your damage to the Hydra is tracked the same as the Clan Boss, an overall damage number. You will need to work with your clan to hit the right difficulty. Each difficulty has its own Total Damage required that increases as you climb in difficulty. The chest rewards you gain align similarly to Clan Boss where you will need to deal a specific amount of damage as a clan to get double the rewards and your keys will also need to hit a certain value. If you manage to do so, great rewards await you. Read our Hydra Clan Boss Rewards guide for more information.

The Hydra Boss brings some unique mechanics that you will need to take into consideration when bringing a team to take down this monstrosity of a boss! Below we have outlined the mechanics that apply across all seasons and heads.

When you start the battle, the Champion with the HIGHEST Critical Damage value will receive a Consumption Debuff. This cannot be blocked, resisted or otherwise removed. It’ll start with 20 and decrease by 1 count everytime a Hydra Head takes a turn. Once the counter reaches 0, the next time a Hydra Head champion takes a turn and attempts to use their Basic Skill (A1) they will instead consume your champion taking out of the battle for a period of time. Once consumed, a new counter is placed on a random champion in your team (although it cannot be a champion that was most recently consumed and released – see below) and the starting counter is reduced. Therefore, having many consumed champions will eventually cause you to run out of duration and end up constantly trying to get your champions back into your team. 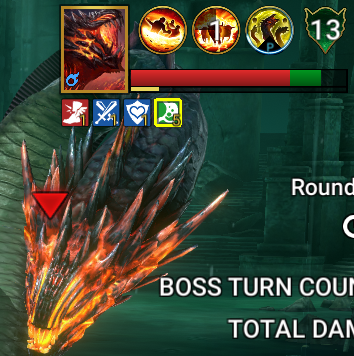 Once the counter for consumption reaches 0, your champion will be eaten by a Hydra Head. This will then apply the Digestion Buff to the Hydra Head with a turn count. Initial this is 5 but it will decrease by 1 for each time a champion is eaten. A green HP bar is added to the Hydra Head. To return your champion back to your team, you need to deal enough damage to clear the green hp bar. The amount of HP required changes per difficulty:

Each Head will have its own HP pool and defence numbers. If you are able to do enough damage to a head to decrease his HP value to zero, then you decapitate the Hydra Head. Decapitating a will disable the head for 2 turns (see notes below) and will not perform any actions. Whilst decapitated it can be debuffed and attacked. Attacking a decapitated head will increase your damage done by 200%. This gives you an avenue to deal significant amounts of damage.

No one strategy is perfect here and you will need to work with the resources and champions you have available to you. We are currently working on writing detailed Hydra Seasons Guides to help you deal with each rotation. Check out also the content being released on HellHades Youtube.