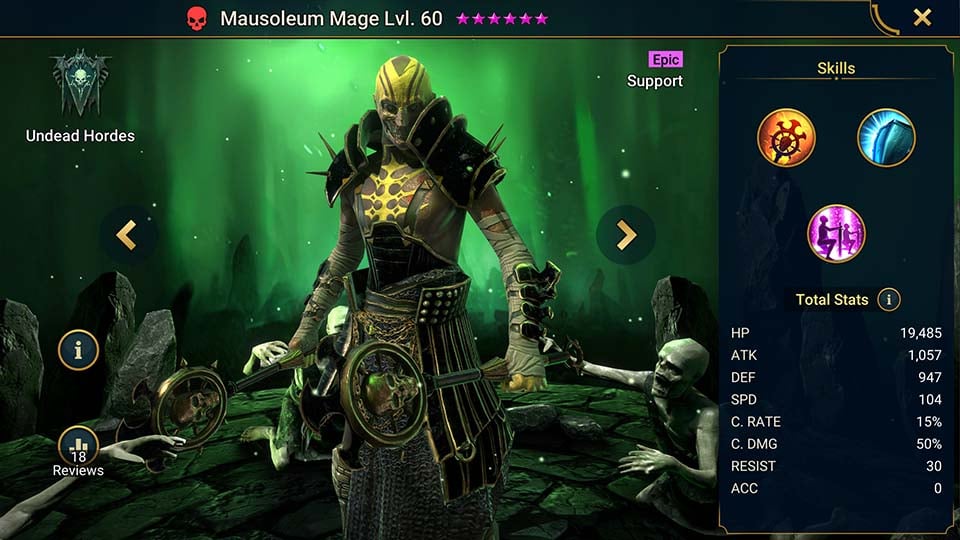 In a freak accident inside the cathedral this young Mage practising simple magic managed to set his robes alight. The damage to his face and body was extensive and his order rejected him now seen as an object of evil. The Mage grew in power and despite his rejection revelled in protecting his allies. He found solace in an order of the Undead now acting as their protector whilst they wreak havoc on Telaria.
Mausoleum Mage is a Force affinity epic from the Undead Hordes. He is a great epics with a kit suitable to help you take your teams through content to the end game.
Mausoleum Mage almost breaks the game when paired with Seer with the ability to give your team 3 buffs each for Seer to remove doing devastating damage.
Best equipped with high defence and high speed he can help keep your team alive with strong buffs such as Increase Defence and Block Debuffs. Even when your team is in trouble Mausoleum Mage has an A1 which can provide speed, healing and cleanse the debuffs from your team.

Mausoleum Mage is a truly versatile and end game epic!

We recommend you use these blessings for Mausoleum Mage.
Team Blessings should be limited to 1 per team. For more information, please read our Team Blessings guide here.