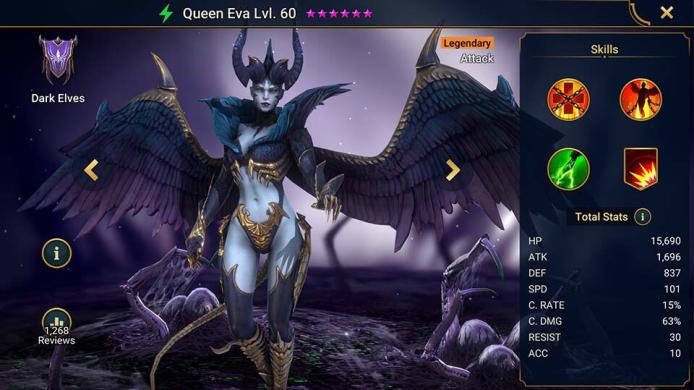 Queen of one of the oldest of the Dark Elves clans, Eva sought violent conquest through many of her years of rule. She eventually lost in one of the great Elven battles and her clan was wiped out, she barely escaped. She still sees herself as Queen but who is there left to rule?

Queen Eva is a Spirit affinity legendary from the Dark Elves faction. Queen Eva is one of the best campaign farmers in the game and is a great dungeon champion up until level 15. After that her abilities do not scale high enough and she becomes a squishy glass cannon. If you can keep her alive she can offer some Ice Golem support with her ability to block revive.
Queen Eva is so good as a campaign farmer due to her inbuilt crit bonuses. She has an all battles 19% crit aura and her A3 gains an additional 15% chance to crit meaning you can build her with just 66% crit rate and more damage.

Overall I feel like Queen Eva is badly in need of a buff to allow her to be relevant through to end game.

Attacks all enemies. Decreases the Turn Meter by 20%. Resets the cooldowns on each of this champion’s skills if any target is killed. Has an extra 15% chance of inflicting a critical hit.
Level: 2 Damage +5%
Level: 3 Damage +10%
Level: 4 Damage +10%
Level: 5 Cooldown -1

Increases Ally C.RATE in all battles by 19%.

We recommend you use these blessings for Queen Eva.
Team Blessings should be limited to 1 per team. For more information, please read our Team Blessings guide here.