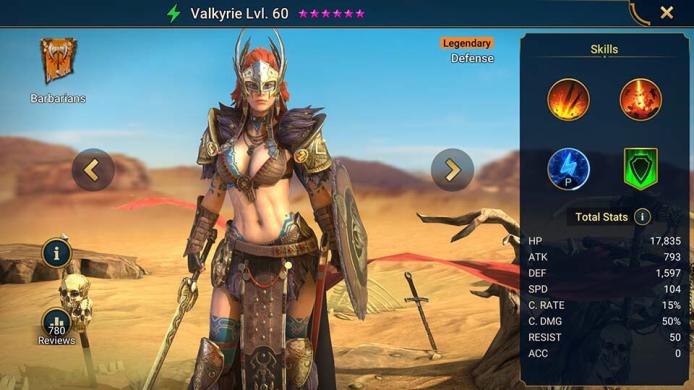 Valkyrie is a Spirit affinity Barbarian Legendary champion and one of the biggest game changers in the game! She is one of only 3 champions in the game with the ability to buff her team with a  counter attack buff. This is extremely strong in Clan Boss and Fire Knight. On that same ability she also gives the whole team a shield which scales directly from the amount of Defence Valkyrie has. This enables some crazy damage opportunities on Clan Boss with the Valkyrie shield absorbing the damage your team would usually take.
In my end game Ultra Nightmare team I have achieved over 100 million damage with Valkyrie being an irreplaceable part of that team!
If you switch her build to higher accuracy she also has a very interesting passive which can be a way to make your team go first in the Arena if you are struggling to win speed races.

Clan Boss
General PvE
Offense
Defense
Support
Offense
Defense
<img title="Cycle of Revenge - Has a 50% chance of increasing the Turn Meter by 15% when an ally is attacked with a critical hit. Will only increase the Turn Meter once if an ally receives multiple critical hits from a single Skill" alt="cycle-of-revenge" class="lazyload ignore-lazy" src="data:image/gif;base64,R0lGODlhAQABAAAAACH5BAEKAAEALAAAAAABAAEAAAICTAEAOw==" data-orig-src="https://hellhades.com/wp-content/plugins/rsl-masteries/asset