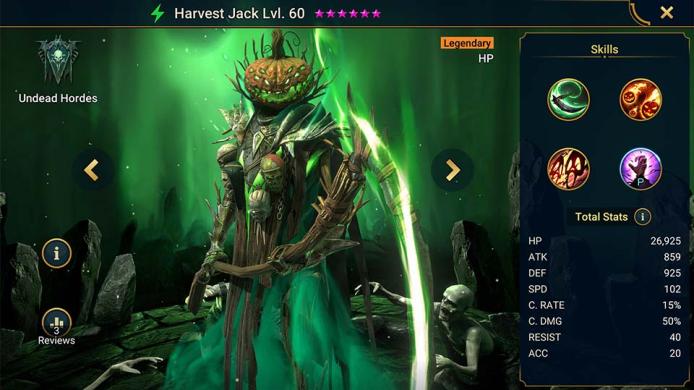 Cinderella had a kind fairy Godmother, her pumpkin was turned into a fancy carriage to carry her to the ball. When the ugly sister asked for a similar carriage her pumpkin became something very different, and that’s how Harvest Jack was born. When the clock hit 12 instead of turning back into a simple pumpkin he went on a killing spree destroying the two sisters and half of the guests at the party, laughing like madman as he went from one person to the next.

Harvest Jack is a Spirit affinity legendary from the Undead Hordes faction. Harvest Jack joined Raid: Shadow Legends during Halloween 2019 along with Brakus, Madame Serris and Miscreated Monster and was available as a Fusion. Harvest Jack is an HP based champion but doesn’t hold the damage of a Sir Nicolas. His biggest attribute is his debuff abilities completely controlling enemies with AOE true fear. He can completely swing an Arena fight with an A1 that steals buffs and AOE abilities exchanging buffs for debuffs. Make sure you build him with high accuracy and speed to enable his great abilities.
He will help any account progress through content but will be out scaled as you progress by better champions.

When attacked, decreases the duration of all buffs on the attacker by 1 turn.