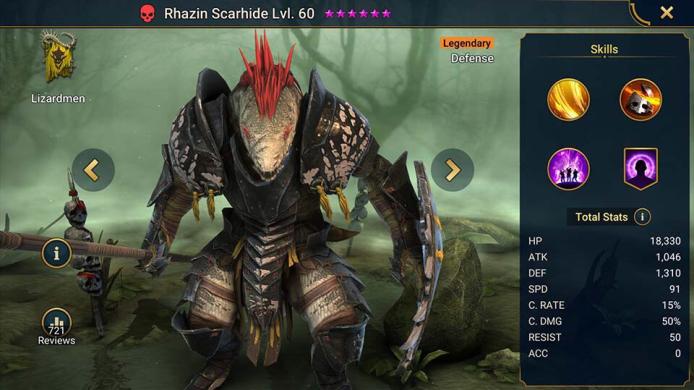 Rhazin Scarhide is a Force affinity legendary from the Lizardmen faction. Rhazin was added as a permanent fusion (still the only legendary champion in that section) and was deemed a fantastic opportunity this is for everyone to gain an amazing legendary! Over the years I feel like Rhazin has been powercrept and it nowhere near as impactful as he once was!
Rhazin is able to step in as a defensive tank in spider soaking up a lot of damage, or switch to a hard hitting turn meter dropping AOE damage dealer in Arena, or switch again to a high sustained damage dealer in Clan Boss. Rhazin is a deceptively high damage dealer with an A2 that drops a single enemies defence and puts weaken on them making your whole team hit them a harder. Ideally in most situations you would take Giant Slayer as his top tier mastery but in Arena you can change it up and take Helmsmasher and nuke hard with his A3.
The biggest challenge is that for Clan Boss unkillable teams are easily favoured now and he is certainly not an Arena Meta champion.

Rhazin is a fun and versatile champion however I now feel like he needs a buff to regain his relevance.

Increases Ally RESIST in the Arena by 90.