Ultimate Clan Boss Guide – Everything You Need to Know

Ultimate Clan Boss Guide – Everything You Need to Know

If you play raid shadow legends you will know about the clan boss. It’s the only place you can get the really juicy stuff like; Shards, legendary, epic, and rare books along with Cruel and immortal gear.

Before I go into the details. I’ll go over the basics;

There are many different stages from easy to ultra nightmare. Make sure your clan is hitting the right sort of level boss for you. The further you get through these stages the better the rewards will be, and when you get to ultra nightmare, like where I’m at now. You can start to get the top rewards like sacred shards and legendary books.

When you click on the clan boss banner in the battles tab on the home page. You will notice there is a key counter on the top right of the screen. it respawns a key every 6 hours. So, potentially you can get 4 hits on the clan boss for free. Make sure you use them, time your hits at the right time and you will get better rewards every day.

Firstly let’s go over what he does and how he does it. When you know this you will understand what positions and roles are needed to compete with that boss.

His first 2 moves are AOE (Area of Effect). They are going to nuke your teams and he hits harder the longer the fight goes on. You will need to bear that in mind.

His first ability is crash through, which is a 4 hitter, if he is the void affinity which is the first 50% of his health he will not buff himself. But when he becomes an affinity boss (e.g. magic, spirit, or force) he places an increase attack on himself. It’s really important to remember that when you get to the later stages of the game. His increase attack will boost his attack significantly. This move will recycle around its on a 3 turn cooldown.

His second ability is Belittle, this is a single hit. This is the hardest-hitting aoe move that he does. If you are going to be putting on increase defence or shields. You need to put them on before this ability lands. When he hits you with this ability he will place different debuffs depending on the affinity

The third move he does is a single target ability called Crushing force. This ability places a stun. He will come and smash one of your champions and he will stun them for 1 turn. It’s really important to realise when that’s going to come. As you become more efficient at this game you will be able to put block debuffs. So, it stops the stuns completely or you might have someone in your team that can cleanse (remove) the stun. Both of those are going to be really effective to keep your team alive for longer. The stun hurts a lot. So, you are going to want some sort of healing going on once that hits.

His first one, Infernal Resilience decreases the damage received from poisons, HP burns and enemy Max HP abilities (e.g. coldhearts A3 and royal guards A2) these are capped out.

They cap out at different amounts depending on the level of clan boss you come up against.

At the highest tiers, they max out at 50,000 damage for poison. But it is still a massive amount of damage. The maximum amount of debuffs you can have up is 10. If you try and stack more poisons they will do nothing and will not land.

HP burn will hit harder when you are on lower level bosses and it diminishes and drops the further you go up.

Also, good to remember is the demon lord is immune to stuns, freezes, sleep and decrease speed. Decease turn meter doesn’t work as well along with HP balancing/exchange abilities.

The Second passive is Gathering Fury. This ability is very important to know, from the 10th turn his damage starts to ramp up. Every turn incrementally goes up and up. Then from turn 20, it goes up at a faster rate. So, the quicker you can do your damage, the more chance you have to survive and get a high hit. Then, basically from the 50th turn he will ignore block damage and unkillable buffs and nuke your team. So, the faster you get your damage in the better.

The final passive is Almighty immunity This passive ability means he is immune to all the debuffs mentioned above along with block cooldown skills, fear, true fear and provoke. So, you should not bring them into this fight. They are useless.

Now that you know what he does and how he does it. Let’s move on to how to beat this big guy.

We need some primary roles especially if you’re early game and as you get more adept at fighting clan boss you will want to have some of the secondary roles.

The second most important ability is poison/HP burn; But poison is the bigger one. You can only get 1 HP burn on ever, so there is no point in bringing more than one person who can do that. But poisons you can stack right up to that 10 debuff limit on the clan boss. They are going to be your single highest damage that you do to this clan boss. It’s better than bringing in big damage dealers. Unless you are absolutely at the end game.

Next up is increase speed; especially if you are an early game up to at least brutal clan boss. You will want to be going as fast as you can. You want to make sure you are having as many turns as you can have to get those debuffs stacks and to get your hits in. especially if you’re up to a point where you have masteries on your champions and you’re able to do Warmaster and giant slayer procs.

Counterattack; and if you have this you are a lucky one because there are only 3 champions who can do place counter-attack on your whole team: Valkyrie, Martyr, and skullcrusher. If you have one of them. They are essential in your team and they will enable you to put out tons of damage. Basically, They put counterattack on your entire team so you get to put more hits in and more chances to place your debuffs and the clan boss will take more damage

And the final primary role is a healer: your taking damage, AOE damage, continuously. So, you need to be able to re-top up your health. There are 2 ways you can do this. You can either put your entire team in lifesteal gear. Lifesteal gear is really effective in the clan boss or you can have somebody as a primary role healer. Both of those things are really effective. As you get more into the game. Lifesteal set is probably more effective than having the healer as you would want to have more of a chance to get more damage and more debuffs to do well.

Decrease defence and weaken will help you push out more damage. Weaken is better early game. Decrease defence then becomes better late game. The reason for this is the clan boss has quite a low defence when it’s easy, normal, hard and brutal. When you get to nightmare and ultra nightmare the clan boss defence starts to scale really high. therefore bringing decrease defence enables you to do your hits much easier.

Things like ally protections, increase defence and debuff extenders are really good for your team. Make sure you lookout for the champions that have these abilities.

The most important stats to be aware of for clan boss are your speed, your accuracy and your defence. 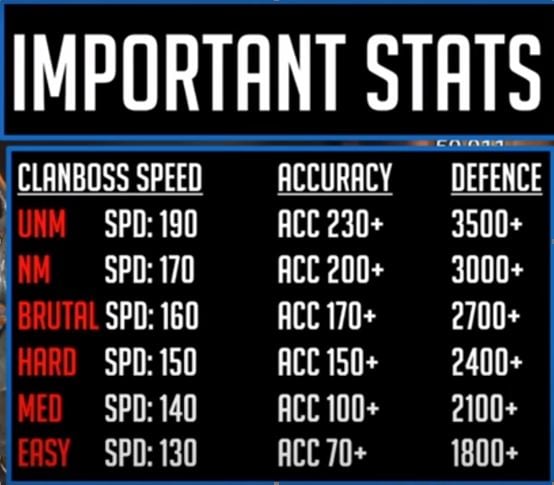 Generally, you will need to make sure you are going faster than the clan boss you are hitting. Up to brutal you want to lap the clan boss as many times as you can. So, you need to be as fast as possible. Great champions for that are like apothecary, high Khatun even diabolist. These are some of the champions that you can bring in that can increase your turn meter.

Accuracy is so important because if you are not landing your debuffs then you are not going to stay alive.

Lastly is defence this is something that is so important in this game if you have a decision to make whether to put more health or more defence for your clan boss team 99 times out of 100 times you should pick defence. The defence numbers in the above chart is a guide to the minimum number you should get. The clan boss has no way to decrease your defence so, the higher your defence the longer you will stay alive, which in turn will help you increase the damage you will do to the clan boss.

Here are some examples to help you reach the stats that you will need for clan boss.

Focus on your great hall. First on accuracy. then on defence, this will help you build those scores up higher to make this fight much easier for you. 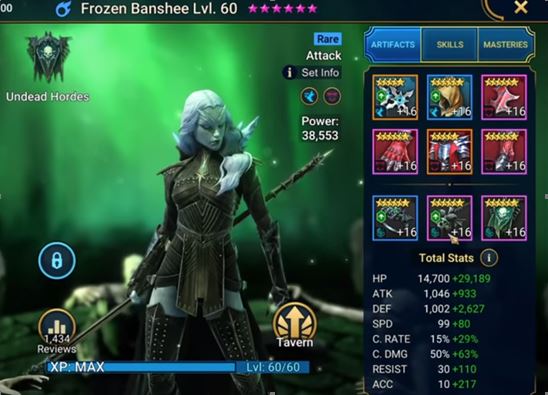 Make sure she has enough defence speed and accuracy to land her poison sensitivity and poison debuffs.

This is a good rule of thumb for any champion in this game for clan boss.

An example of a F2P friendly clan boss team is:

Good luck everyone!!! Clan boss is the only place where you can get Books and shards on a regular basis. You can also get end game gear cruel and immortal.

Let us know what boss you are hitting and what is your personal best score in the comments we love to hear from you!