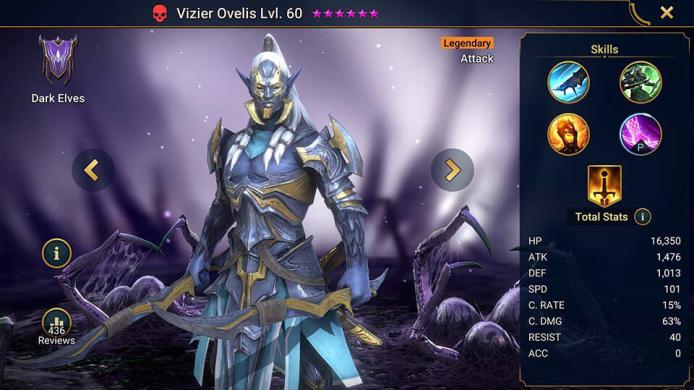 Vizier is a Force affinity legendary from the Dark Elves faction. Vizier is one of the biggest game-changing champions to summon to dramatically change your whole setup for Clan Boss. He is out and out a Clan Boss specialist! Vizier has an A1 that can extend the duration of debuffs on your enemy, therefore against Clan Boss he can extend over and over all debuffs such as poison, decrease attack, decrease defense etc. In most instances, you can make it such that these debuffs will never drop off of the Clan Boss for the entire fight! This ability does need accuracy to land!

Vizier does have debuffs himself such as decrease attack, block buffs, and heal reduction. He also has a spread debuff ability which can be useful in wave management and control for areas such as Faction Wars and Doom Tower. It can also be a great tool to activate a full enemy HP burn against Spider 19/20 if you do not have an AOE skill. A team ally can target the spider with a single target HP burn and Vizier can then spread the debuff to all spiderlings.

Vizier can also be used in Doom Tower partnered with poison champions and poison exploders. Vizier is great to extend all the debuffs duration before the exploding champion such as Elenaril or Zavia blows them up.

Overall Vizier is a Clan Boss specialist with some utility in other areas if required.

Attacks 1 enemy. Applies a Debuff Spread effect, taking 2 random debuffs from the target and placing them on all enemies. Places a Perfect Veil buff on this champion for 3 turns if the target is under 2 or more debuffs.
Level 2: Damage +5%
Level 3: Damage +5%
Level 4: Cooldown -1

Places a Perfect Veil buff on this champion for 2 turns at the start of each round.

Increases Ally Attack in Dungeons by 34%