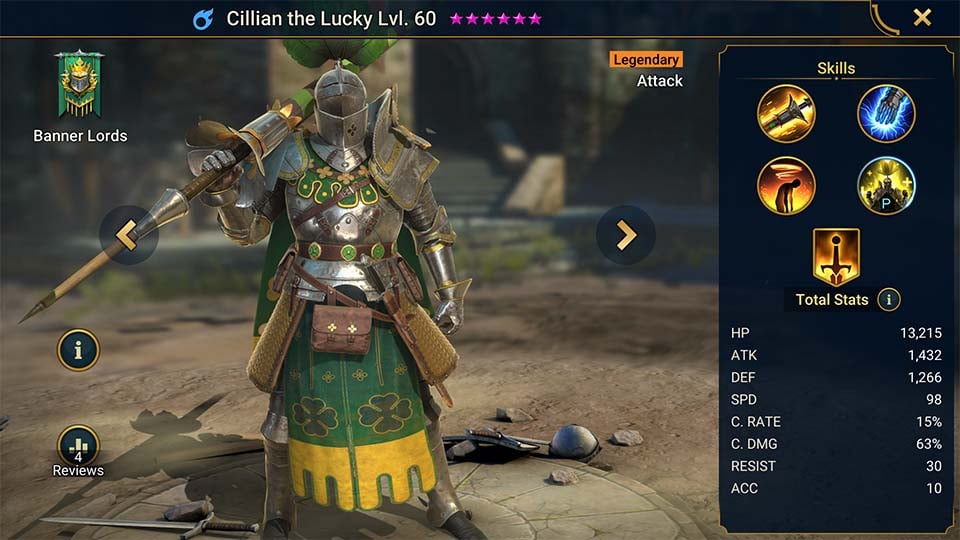 Cillian the Lucky was not so lucky as he lost his jousting horse, however, he managed to overcome this and is here today in Raid: Shadow Legends! He joined on the St.Patricks Day Fusion event in 2020 and was one of the easiest fusions to acquire. This was because the fusion consisted of champions that were already available in the game: Necrohunter, Corpse Collector, Suwai Firstborn and Jinglehunter. These weren’t too tricky to get through the events either but most players had a copy of these champions locked away in their vault.

Cillian the Lucky is all single target which does let him down but he is a great control champ for the enemy he does hit. With Books on his a2 he has a 50%  to place a Block Active Skills debuff on all enemies so I guess you have to be the lucky one for him to place it!

Cillian is great to have in Faction Wars for the Banner Lords with a kit focused on controlling your enemies with abilities such as Stun, Block Cooldowns and turn meter reduction. Cillian the Lucky needs to be built with strong accuracy and speed to work through his abilities and land that control.

Increases Ally ATK in all battles by 25%.

We recommend you use these blessings for Cillian the Lucky.
Team Blessings should be limited to 1 per team. For more information, please read our Team Blessings guide here.