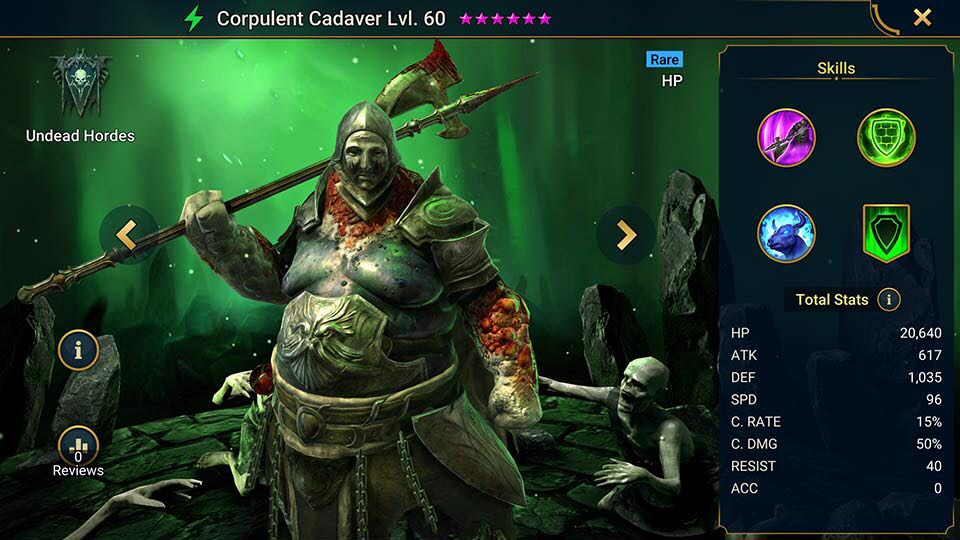 This is not the guy to invite to a family BBQ, he eats an insane amount!
Corpulent Cadaver was featured in an extremely niche clan boss team named the Infinity team. I have run this Clan Boss setup myself and have made a video showcasing the team breaking the Clan Boss world record. https://youtu.be/eWTO3rBUU7Y
This team relies on Underpriest Brogni applying and then extending HUGE shields and a team of allies also ensuring that buff never falls off. In this team the Cadaver can hit for millions of damage per A1 hit! Some also use him against the HP Rare secret rooms as a niche use case. Out side of this he is really a poor quality champion making him extremely challenging to grade on a website! Both CRAP and a WORLD RECORD HOLDER!

Corpulent Cadaver is a Spirit affinity rare from the Undead Hordes.

Increases Ally DEF in all battles by 15%

We recommend you use these blessings for Corpulent Cadaver.
Team Blessings should be limited to 1 per team. For more information, please read our Team Blessings guide here (coming soon).