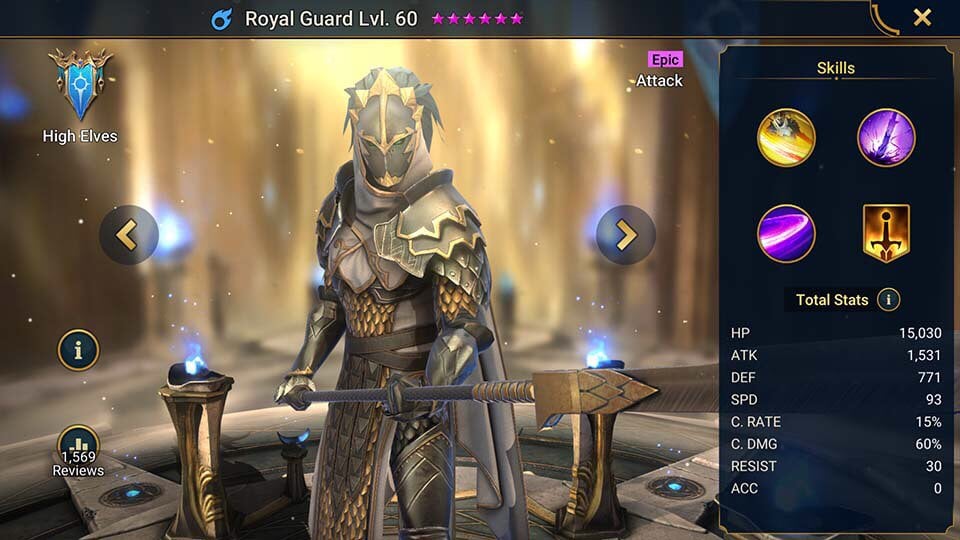 Royal Guard uses his awesome joust as his weapon that can inflict some serious damage to his foes! He is an Epic from the High Elves faction and one of the most desired Epics in Raid: Shadow Legends! Royal Guard is the hardest-hitting Epic in the game versus Dungeon Bosses and one of the hardest-hitting overall champions in the game! He has an A2 ability which scales from the Enemy Max HP. Therefore the further you get through the game and fight tougher enemies, the higher their HP and the harder this ability hits for!
Royal guard also has a single target decrease Defence on his A1 and a multi hitting A3 which decreases turn meter and speed making him a truly amazing champion.

You will want to build your Royal Guard to have 100% Crit rate, High Accuracy (200 for level 20 dungeons), good speed but less than your decrease defence debuffer in your team and as much Crit Damage as possible. To ensure your Royal Guard stays alive it is best to have a HP% chest and an HP ring.

Overall Royal guard will be part of some of the best speed farm teams in the end game in Dragon, Ice Golem and Spider and a staple in Faction War teams. Since release of Doom Tower his signature A2 is also running the show against Agreth provided you one shot the spiderlings or nuke before they even spawn and against Kuldath the Magma Dragon. he also shines well in the Iron Twins Dungeon because he is just such a beast!

Increases Ally ATK in Dungeons by 35%