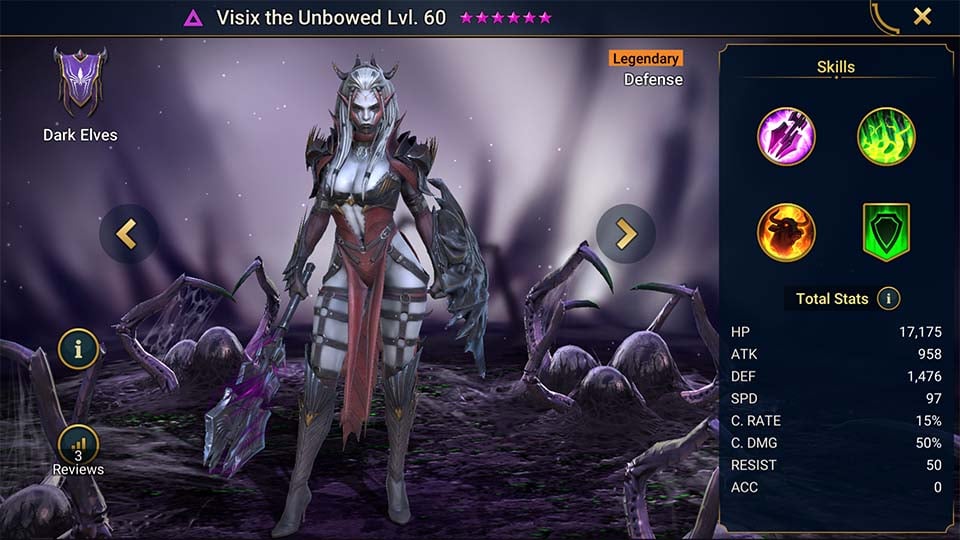 Visix the Unbowed was long considered a terrible void legendary champion, especially as it was the champion you received as a Login Reward. However Visix was buffed and now her kit actually makes a considerably strong carry for many areas of the game.

She is a speed and turn meter control freak dominating enemies with an AoE Decrease Speed on a 3 turn Cooldown when booked, perfect for high end content such as Hydra or for climbing the Doom Tower. She also brings one of the strongest Turn Meter control skills in the game in the A1. Only Armiger and Alure can compete with her when it comes to A1 Turn Meter reduction abilities. If you need to control enemies or slow them down, Visix is the perfect answer.

Not only does she control the enemy turn meters, she can also AoE Provoke making her especially useful in Hydra since the recent change to the Head of Decay (now provokable) and also against Kuldath, the Magma Dragon or in any content where you really don’t want enemies using their skills. She also Provides your team with a 2 turn Ally Protection on a 3 turn cooldown which is especially powerful in keeping your team alive in Clan Boss if you have been unlucky and not yet acquired the more exotic Unkillable and Block Damage champions.

Visix use to be a meme but she is now quite the Queen of carry supports and one of the best Login Reward champions you get on your quest to conquer Teleria.

Attacks all enemies and places a [Provoke] debuff on them for 1 turn. Also places a [Shield] buff on Visix equal to a 20% MAX HP.
Level 2: Cooldown -1