Plarium has released a new in-depth video about the recently announced game mechanic, Awakening, this video gives us a clearer idea of what exactly we should be expecting and how the whole system actually works.

Hey everyone, and welcome to a new Update Preview Episode.

Today, we’re going to talk about Awakening, diving a little deeper into some of the things we didn’t have time for in our most recent What’s Next video.

We’re also working on a second video covering the Iron Twins Fortress, the Bosses’ skills, and highlighting some tactics and strategies to help take the Twins down. But right now, we’re focusing on Awakening itself.

Let’s start with the basics.

Awakening unlocks at Level 42 and is kind of like a mixture of Ascension and Masteries.

The Awakening part itself is similar to Ascension – you awaken your Champions, star by star, to make them stronger. In fact, one of the only real rules for Awakening is that you can’t Awaken a Champion to a higher Awakening Level than their Ascension Level.

So, you Awaken them, then what? Here’s where you’ll find the similarity to Masteries. Once you Awaken a Champion, you can choose a Blessing for them.

These are like super-powered Passive Skills that can completely transform how you use a Champion – unlocking new levels of potential or altering what they do entirely.

Each Blessing belongs to a specific Divinity. For now, there are four: Light; Dark; War; and Chaos. As soon as you Awaken a Champion, you get to pick any Blessing you want – no questions asked.

But still, once you’ve Awakened a Champion, you don’t have to do anything else to actually unlock their available Blessings. However, you can make all the Blessings stronger – by Awakening your Champion to higher levels.

Every Blessing gets better as a Champion’s Awakening level increases – from improving the stat bonuses, to unlocking entirely new effects and abilities.

The best part? It’s all tied to your Champion’s Awakening level – you don’t have to upgrade each Blessing individually. If you have a Champion at Level 5 of Awakening, they’ll get the Level 5 benefits of any Blessing they choose. Simple.

You can also swap Blessings at any time. Just like Masteries, the first change is completely free – but after that, it’s going to cost you some Gems.

You can change to any Blessing available from any Divinity but switching Blessings within the same Divinity will be slightly cheaper than changing their Divinity entirely.

Now, let’s have a look at some of the Blessings themselves – starting with one of our coolest Blessings, Polymorph!

This is a Legendary Blessing from the Chaos Divinity, and it does deliver on the chaos front.

Whenever any enemy places a debuff on a Champion with this Blessing, or steals or removes one of their buffs, there’s a chance they’ll receive a little debuff themselves.

Only, it’s not a normal debuff, like an Attack or Defense Decrease – they’re going to get turned into a Sheep and lose access to every single one of their skills.

There’s only a 5% chance of this happening at Level 1, but if your Champion is fully Awakened all the way to Level 6, you’re going to have a 20% chance of turning potentially any Champion into a Sheep for 2 turns.

And if you’re wondering what life as a Sheep is like – well, any Champ that’s been sheep-ified will only be able to use a single Sheep Skill.

They’ll charge forward, attack one enemy, and, uh, that’s it. But, they’re a Sheep, so Herd Mentality comes into play – whenever one Sheep attacks, all the others will join the herd and attack too.

Getting turned into a Sheep can basically take a Champion out of the game for 2 whole turns, but it’s not all bad.

Every time you attack as a Sheep, there’s a 50% chance of removing the debuff and getting turned back into Champion form again.

And, whenever you get rid of the Sheep debuff – whether it expires or you lose all your HP as a sheep – you’ll return to Champion form at 50% HP, no matter how much HP you had before you got Sheeped.

It’s a fun Blessing, and even more fun Debuff – and we can’t wait to see what you do with it.

So, that’s a Legendary Blessing, but other Champions have access to a lot of awesome Blessings too.

Survival Instinct is a Rare Blessing from the Chaos Divinity that can really turn a situation on its head.

When an enemy uses a skill that places, spreads, or transfers a debuff onto a Champion with this Blessing, it’s going to boost that Champion’s Turn Meter.
It’s an amazing Blessing to make your Champions interrupt your opponent’s Turn Order and ruin their day.

And here’s another one: Carapace decreases the damage a Champion takes while under a bunch of crowd-control debuffs, like Stun, Freeze, Fear, or even Petrification.

On top of that, it also provides some sizable boosts to the Champion’s HP, Resistance, and Speed – making them far better equipped to make it through enemy stunlocks in the Arena or in those tough Boss Battles.

And remember, these last two Blessings are Rare – so it’s not just the top tier Champions that will be getting some serious benefits from Blessings.

Life Harvest increases the Champion’s Turn Meter whenever an enemy is revived, and destroys a portion of that enemy’s MAX HP for good measure – making them weaker every time.

Chainbreaker helps Champions break free from crowd-control debuffs; Commanding Presence boosts your team’s Aura; and Hero’s Soul boosts a Champion’s damage against Bosses, according to the number of enemies in battle – it’ll be huge for the Spider’s Den.

Next up, Light Divinity – the do-gooders.

The Lightning Cage Blessing protects your buffs and boosts your damage with Lightning Balls.

Heavencast makes your Default Skill ignore some of your enemy’s Resistance, which is great for those with key debuffs on their first skill.

And here’s one of my favourites – Miracle Heal helps recover some destroyed HP whenever the blessed Champion heals. Excellent for bringing into Hydra battles.

And finally, the Dark Divinity – as you’d expect, they’re not manipulating rainbows.

Ward of the Fallen:

Take Ward of the Fallen; it gives you special Bone Armor to protect you from attacks, then gives you more as your allies perish around you.

At the highest level, you’ll even summon undead skeletons to charge at your enemies. It’s… awesome

The Lethal Dose Blessing then increases the damage you deal from Poison debuffs in the Arena, and ignores some of the enemy’s resistance while you’re at it.

If that doesn’t sound painful enough, the Cruelty blessing destroys some of your enemy’s defense, making them far, far easier to hurt.

Alright, that’s a super quick flythrough of a few of the coolest Blessings – keep an eye on our social channels for more.

Now you know why you want to Awaken your Champions, let’s talk about how.

It all starts here, at the Altar of Souls.

But we’re making a dedicated video on the Twins later, so we’ll ignore them for now.

Now, imagine – you’re the best. You crushed the Iron Twins. You’ve got alllll the Soul Coins in the world. Time to get your hands on Champion Souls and awaken some Champions.

To start, let’s recap a few rules: Only Rare, Epic, and Legendary Champions can be awakened – and each Champion needs their own Souls. You can’t Awaken Venus with Valkyrie’s Souls, for example.

Another big thing to remember is that your Ascension level matters for Awakening.

Champions can’t be Awakened to a higher level than their current Ascension level. To make it easy to track, your Awakening level is indicated with a fashionable red colour.

Okay – so, Souls. There are two types of Souls: Perfect Souls and Split Souls.

Perfect Souls let you Awaken your Champion to the exact level indicated by the number of stars they have, without any extra steps or requirements.

If you’re lucky enough to find a 6-star Perfect Soul for Valkyrie, you can fully Awaken her in a single step.

Split Souls, on the other hand, Awaken your Champions one level at a time. For example, if you find a 5-star Split Soul, you’ll only be able to use that on Champions that have already reached Level 4 of Awakening.

Now let’s talk about getting those Souls.

Perfect Souls are the most flexible and powerful, so you’ll want to get your hands on as many of these as possible.

The main way is by summoning them with Soulstones – which always gives you Perfect Souls.

And to get Soulstones, you’ll need to head to the Mystic Market and use the Soul Coins you’ve earned from beating the Iron Twins.

The better the Soulstone, the better your chances of receiving top-tier Souls – meaning higher Level souls for higher Rarity Champions. You can see the breakdown below.

Summoning Souls using Soulstones requires Silver in addition to the Soulstones themselves, and the process is similar to summoning Champions from Shards – so you should get used to it in no time.

As an added bonus here, you’ll be able to constantly upgrade your stockpiles of Soul Coins through using Soulstones.

For example, if you use 10 Mortal Soulstones, you’ll receive 200 Immortal Soul Coins.

You can also get some Eternal Soul Coins by using Immortal Soulstones. It’s a nice, easy ladder that means you can get high-tier Soulstones just for Summoning Souls.

But that’s not all. As you know, there are hundreds of Champions in Raid, and getting the right Soul, for the right Champion, sounds like it could take a while – so we’ve got something to help speed that process up.

Introducing the Wishlist. You’ll get to choose 9 Champions to add to your list, then your odds of summoning Perfect Souls for those Champions from Soulstones will be doubled. Simple, no strings attached!

So, that covers Perfect Souls – but what about Split Souls?

You can get Split Souls from the Soul Merchant – but, instead of using Soulstones, you’ll be exchanging Soul Essence.

You can either find Soul Essence by raiding the Iron Twins Fortress, or by buying it with Soul Coins.

Fortunately, the advantage of the Soul Merchant is that you get to pick and choose which Souls you want.

The Merchant has Souls of every Level and Rarity, but the Merchant’s stock changes all the time – you’ll need to stop by regularly and see what’s in stock.

To make it even more appealing, the Merchant likes to make sure they have what you’re looking for – so you’ll never get a Split Soul that’s of a lower level than what you need.

For example, if you have a Valkyrie at Level 3 of Awakening, the next Split Soul you see for Valkyrie will be Level 4. And, if a Champion hasn’t been Awakened at all, you might even see a few Level 1 Perfect Souls as well!

Bottom line – when it comes to the Soul Merchant, make sure you check in regularly to catch the Souls you need.

Where to find your Souls:

Those are all the ways to get Souls, but once you have them, you’ll need to know where to access them.

This one’s easy – head to your Soul Collection. It functions pretty much the same as your Champion Collection, where you can expand it if you need more Slots.

Oh, and one big thing to remember – you can always sell any Souls you don’t want, to get some more Soul Coins. This way, nothing’s wasted – and you get to start the hunt for Souls again. 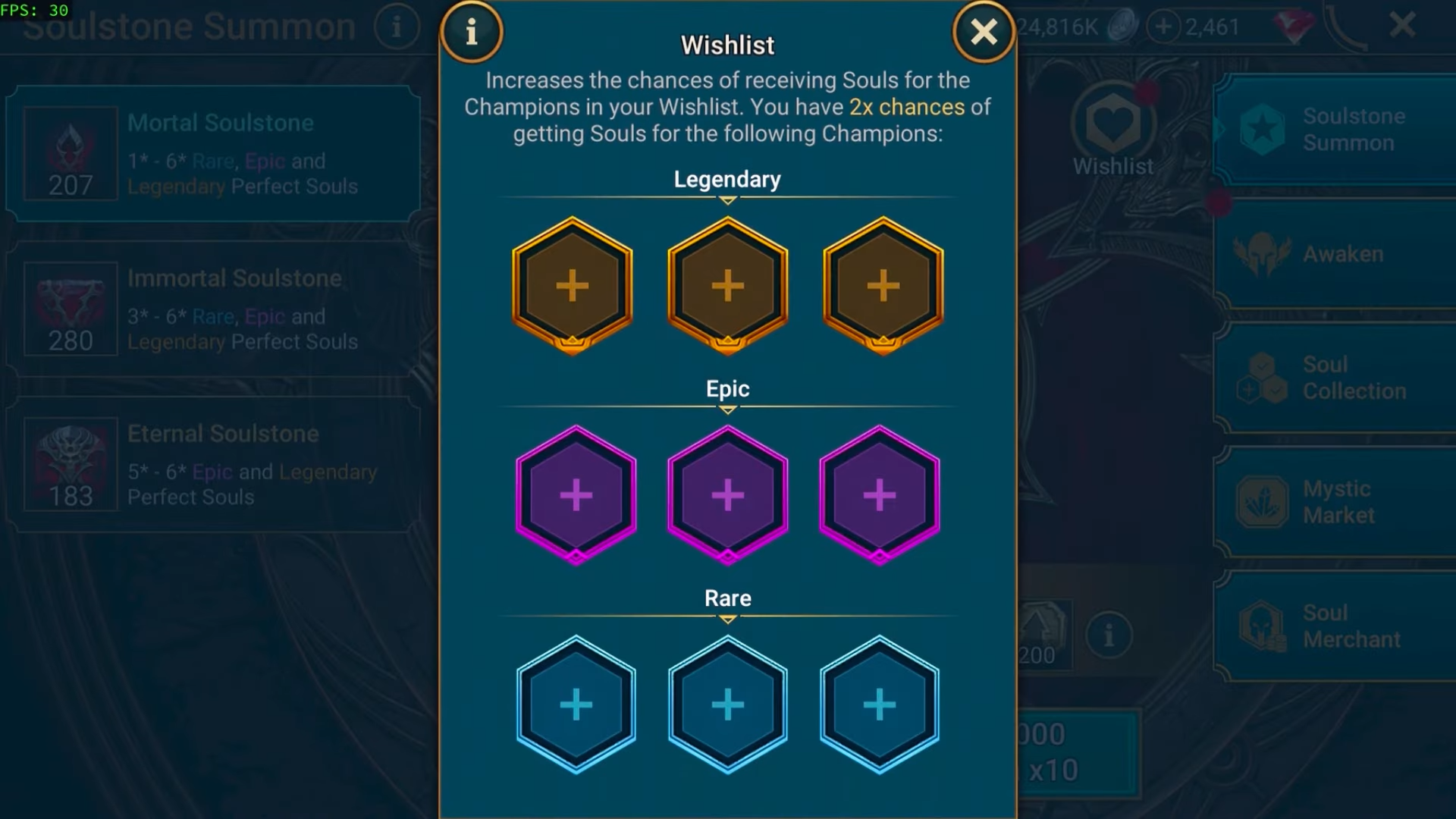 And that’s everything! Keep an eye out for that dedicated Dungeon guide we’ve promised – and click like, subscribe, and hit the notification bell so you can catch it as soon as it’s released!

Until next time – happy Raiding!