Here are the top heroes to farm and acquire in Dragon Champions for both Order and Clan factions.

5 – Freezard – He is the first champion offer that you’ll receive in the game for £2 he will carry you through the early to the mid – late game due to his very strong aoe nuke that he has. He can decrease enemies turn meter and will be useful for controlling the waves. He has an aoe decrease defence which will be very handy when coming against the mobs so your team will do more damage due to them having lower defence stats. This also pairs well with his aoe nuke as he can drop defence then nuke them and gain some turn meter back. His passive allows him to survive a fatal attack then will heal Freezard for 35% and will gain 35% turn meter. He can also inflict a slow which comes in vital vs the later bosses. In our opinions buy this deal and he’ll get you through the game until you can strengthen your team more!

4 – Eric Shieldbreaker – This is a very slept on hero as he can come in very handy as you progress through the game. As you get into the game you’ll realise that shields play a key role so having someone in your team called “Shieldbreaker” will give you a hint that he will be needed in your team. He has a shield penetration ability, he does more damage vs hero’s with shields. He has an aoe debuff immunity and armour increase to make your side tanky and withstand more damage.

3 – Master Duo – This blind panda is very strong despite not seeing his opposition. His kit consists of a slow which is great vs the later game bosses. He can decrease turn meter of the enemies. He can increase his damage, crit rate and crit damage whilst having a counter attack. This can come in clutch as he’ll be counter-attacking nukes. He also cannot be blinded due to the fact he’s already blind!

2 – Snorri – He’s an early game specialised and falls off a b it later but until late game he’ll put you on his shoulders and carry you through the levels! He increases turn meter and deals more damage in his attack. He can make his enemies bleed and has a nuke of an attack. he can increase his accuracy. Be careful using him past mid game as he won’t be as good but early he partners up well with Freezard and they just walk through the mobs.

1 – Patriarch Qi – He is a born leader with a leadership skill that all healing applies a shield equal to 45% of the health healed. All attacks by allies from order restore their shield by 20% of their damage dealt. This is a huge leadership skill and is probably one of the best early support champions with that alone. He has a shield which equals 700% of his magic damage. He has a tenacity increase and an aoe self control for the team.

5 – Tromgar – You can get him early into the game and he is a tanky hero (one of the best). He has a taunt and a counter attack which are big buffs to have total control of the enemies. His a1 has a stun so when the counter-attack buff is up he can just keep controlling the waves single handedly.

4 – Kaira – She is a strong hero who has the ability to counter – attack, place an invisibility buff and apply ability block. She is a power house and has a good set of utility abilities for you to try and build out.

3 – Maar – This hero is very good for early damage as he has a increase crit rate and damage and he can increase his turn meter. You should be careful using him further than that though as he falls off hard. He has an aoe nuke which does more damage based on the enemies missing health so you should play him after the enemies have been hit hard so he can execute them!

2 – Rantha – She has her battlepooh which is played to be a offtank hero so she can still do damage and tank up the damage incoming. She has a leadership skill which is if orcs do damage they gain lifesteal. She partners well with Maar!

1 – Korkhrim – This is a free champion you can get if you use the promo code HELLHADES. He has a chance to stun with an aoe attack. His a1 has burn damage and when the target is burned does more damage. His a3 does an aoe nuke if the target is stunned or burned so ake sure you set him up with lots of speed to make sure you get him multiple turns.

Welcome to HellHades.com bringing you the latest news and guides for Dragon Champions, Raid Shadow Legends, Incarnate and Ashes of Creation. 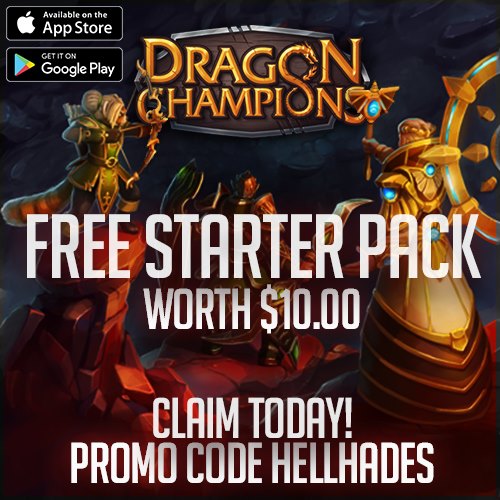