Astranyx, the Dark Fae appears only in Rotation 3 in the Doom Tower. She is the final boss of this rotation, and you will encounter her on levels 40, 80, and 120 on both Hard and Normal.

Let’s break it down!

A1 Darklight Beams
Attacks all enemies. Has a 100% chance of placing a [Leech] debuff on each enemy for 2 turns.

A3 Faerie Storm (Cooldown: 3)
Attacks all enemies. All living allies will team up and join this attack. Damage increases by 25% for each living ally.

A4 Dark Abduction (Cooldown: 4)
Banishes 1 enemy Champion and spawns a Mirror Copy of them onto Astranyx’s team. Places a [Fear] debuff on all enemies for 1 turn. Increases Astranyx’s [Dark Energy] counter by 1.

Almighty Strength [Passive]
Damage from skills that scale based on enemy MAX HP cannot exceed 10% of the Boss’s MAX HP when attacking the Boss.

Almighty Persistence [Passive]
All Turn Meter reduction effects are decreased by 50% when used against the Boss.

One of the biggest things that you have to handle during the Astranyx encounter, is yourself – the copies that she spawns at the start of the fight, and periodically will be the biggest challenge for you to overcome, and there are a few ways of handling this.

Aside from handling these mirror copies, the best way to defeat Astranyx is to prevent her from taking a turn afterward, to do this you will want to run multiple Turn Meter controllers and utilize Decrease Speed to slow her down.

One of the key things to this fight is ensuring that you reach the boss with all of your Cooldowns available, so this may require you to manually play this encounter or to ensure that your team is tuned to have abilities ready at the start of the boss encounter, for example, Lyssandra’s A3 to instantly drop turn meter on all mirror copies.

Beating Astranyx, the Dark Fae can be done in a few ways and we have some examples of team compositions below! First, let’s cover the minimum stats you should aim to hit.

The key stats you should consider are Accuracy and Speed on your team alongside good HP/Def to survive the damage. You can choose to add resistance to reduce the impact of some of Astranyx’s abilities, but it is not mandatory.

You will face Astranyx on Floor 40, 80 and 120 Normal and is Void Affinity. To be successful, aim for:

Depending on which strategy you choose, you should ensure you have enough HP and Defence to survive this encounter. Generally we advise at least 30k HP and 2800 Defence for Normal.

You will face Astranyx on Floor 40, 80 and 120 Hard and is Void Affinity. To be successful, aim for:

Depending on which strategy you choose, you should ensure you have enough HP and Defence to survive this encounter. Generally we advise at least 50k HP and 3500 Defence for Hard. 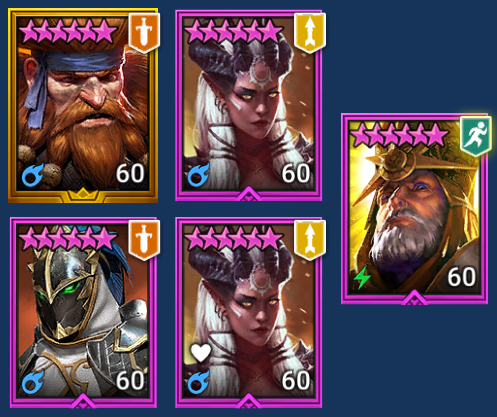 The idea of this strategy as mentioned above is to be able to nuke the first round of mirrors, then simply prevent Astranyx from ever taking another turn by bringing multiple turn meter controllers.

Alure: Alure is undoubtedly one of, if not THE best single-target turn meter controller in the game, and bringing her will significantly help you be able to prevent this boss taking turns

Lyssandra: Not only does Lyssandra bring Turn Meter control for Astranyx, if she is the fastest Champion in your team she is able to instantly drop the turn meter of the mirrors, allowing your team to take their turn and nuke them quickly.

Deacon Armstrong: Much like Lyssandra, Deacon is able to instantly interrupt the enemy mirrors, however without the added benefit of being able to help with strong single-target turn meter control, but he does bring AOE Def Down for your team which is very helpful!

Hurndig: Hurndig is absolutely great for this fight, as he is able to aid the turn meter control, but also he can tear through the mirrors very quickly, he also provides you with lots of important debuffs on this fight.

Royal Guard: Royal Guard, built with accuracy and damage on this fight is phenomenal, although MAX HP is capped, his Takedown skill will still hit for 10% of the bosses HP and annihilate mirror images, his A3 will decrease speed while also dropping the bosses turn meter.

Not every player will have this exact team, but there are very good options to some of these champions. Below we detail viable alternatives: 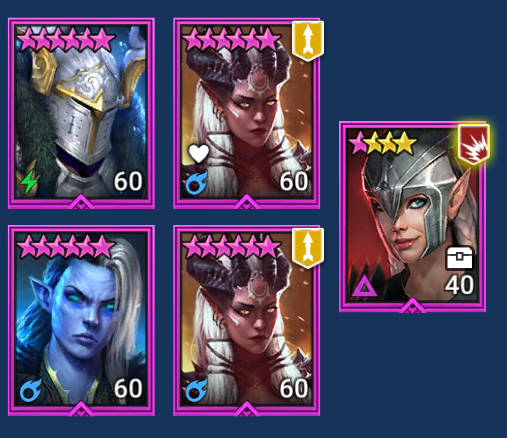 The idea behind this team, is much like the team above where you want to control the bosses turn meter, the key difference however is making sure that you run a champion who can place a Freeze, as the mirror images will used this on your team, and then your Dark Elhain is able to remove that and nuke the enemies, which will always make them a non-issue.

While the core mechanics of this is the same as the team listed above, it’s another alternative method for you to handle the Mirrors.

Alure: Alure is undoubtedly one of, if not THE best single-target turn meter controller in the game, and bringing her will significantly help you be able to prevent this boss taking turns

Dark Elhain: By utilizing an AOE Freeze Champion going first in your team, the enemy mirrors will freeze your team, allowing Dark Elhain to instantly break out and nuke all the mirrors.

Not every player will have this exact team, but there are very good options to some of these champions. Below we detail viable alternatives:
Alure: Armiger, Visix , Blind Seer. – We would not recommend dropping both Alure’s for the higher levels of Hard DT however.
Dark Elhain: Cannot be replaced.
Stag Knight: Lydia, Deacon Armstrong, Any other AOE Speed booster/Decrease Speed Champion can work here
Aleksandr the Sharpshooter: There are many alternatives here, you just need a Champion who is able to place freeze.

Farming Astranyx Rewards forge materials to make the Lethal set. You can read about all the artifact sets you can earn from Doom Tower in our Doom Tower Artifacts Guide.

If you want to Farm Astranyx, we recommend the turn meter terror team. However please bare in mind, until we get control over different wave AI’s, this can be tricky to tune due to needing to have Cooldowns back for the boss, but in the future with that addition it will become significantly easier.