Plarium has announced August’s Fusion, with it being an Underpriest Brogni-Style Fusion, for those of you who aren’t familiar with that term, it comes from the Fusion of Underpriest Brogni, last year – where it combines aspects of Fragment Fusions and Traditional Fusions together.

You will need to gather Fragments to collect the 4 Epic Champions, who you will then level up to level 50 and ascend before fusing the end-goal Legendary.

Let’s hope it’s not as resource intensive as Brogni because this Champion on paper doesn’t come close to the level of Underpriest Brogni.

Lonatharil is a Champion that will be helpful in PvE and PvP content. Let’s go through his kit.
With A1, he attacks one enemy, decreases his MAX HP by 30% of the damage inflicted, and shields your most injured ally. This skill will help you fight against Scarab King as the skill itself has a “built-in” Destroy set.
With the help of A2, Lonatharil attacks all enemies and shields your team for 3 turns. If any of your allies are dead, Shield can be removed neither by enemies nor by allies like Seer. This skill will once again help in fights against Scarab King and Demon Lord as 3 turns Shield will basically have your team permanently protected.
Lonatharil’s A3 allows him to buff the team with Increase C.DMG and then team up with all allies to attack a target enemy. If you don’t have a good team attack Champ yet, Lonatharil will be of great help in fights against Demon Lord (to up your damage there) and in a bit out of meta but still fun blender teams in Arena.
With the help of the Passive skill, Lonatharil deals more damage to enemies under Shield.
On top of that, he has a high HP Aura for Doom Tower battles.

Gallantry
Attacks 1 enemy, Decreases the target’s MAX HP by 30% of the damage inflicted. Places a [Shield] buff equal to 10% of this Champion’s MAX HP for 2 turns on the ally with the lowest HP.

Finest Hour – Cooldown: 6 Turns
Places a 30% [Increase C.DMG] buff on all allies for 2 turns, then teams up with all allies to attack a single enemy. 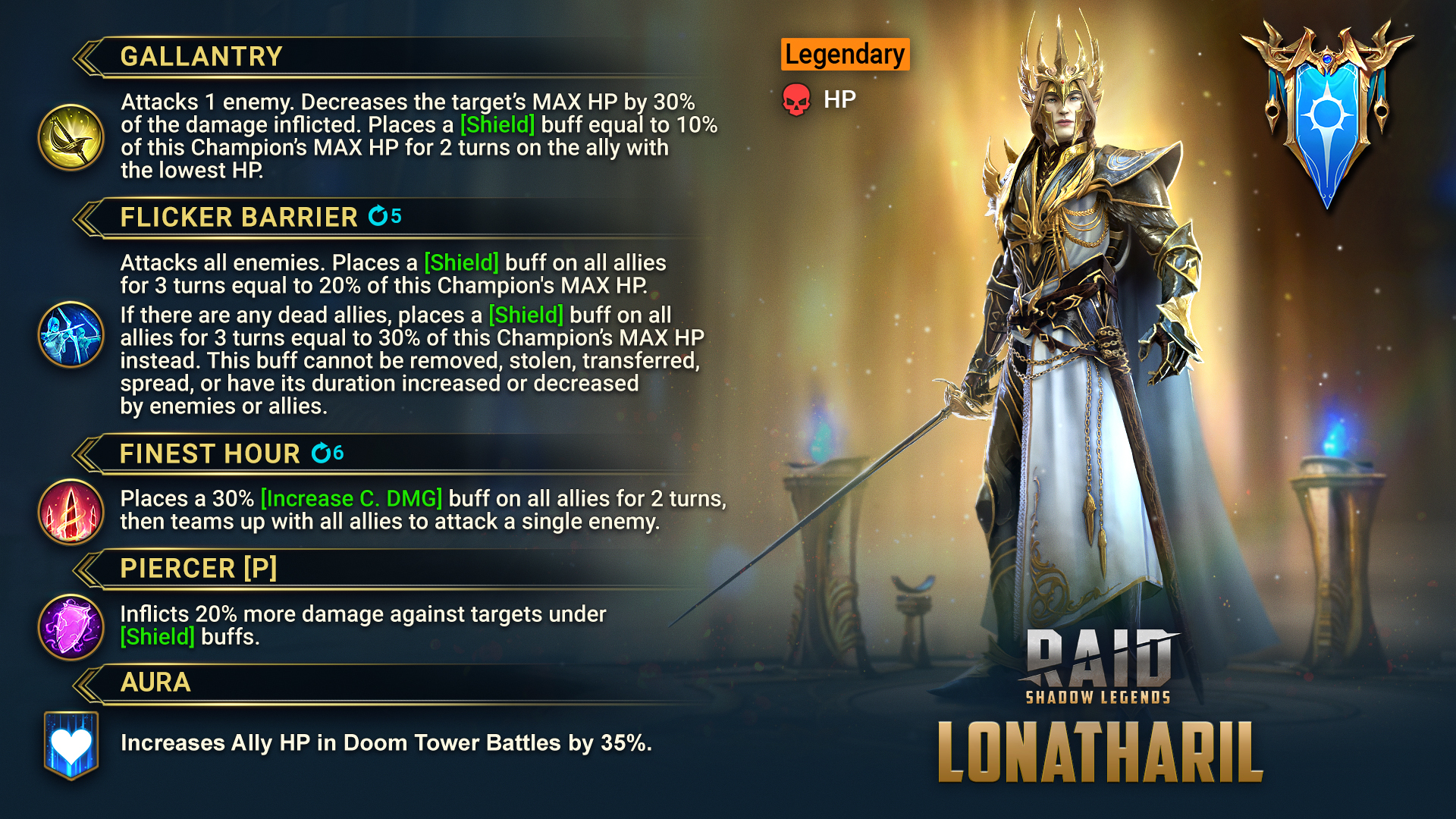 As always, we will cover this fusion every single day – helping you to get your hands on this Champion if you so choose to go for it.