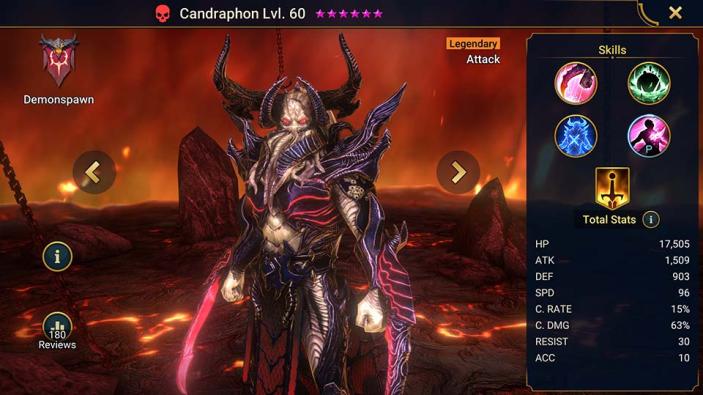 Candraphon is a Force affinity legendary champion from the Demonspawn faction. Candraphon was a meme in Raid: Shadow Legends as the worst legendary ever made however was buffed in September 2020 to become a Top5 arena nuker and a generally strong champion. Candraphon has enhanced skills whilst under a Veil and pairs extremely well with Duchess from the same faction, this duo in faction wars is capable of carrying a far weaker team to victory.
Candraphon’s strongest role is a 1 shot team nuker in Arena if geared with high Atk, Crit and Crit Damage and he has the ability to reduce the damage taken on himself if he has a veil buff which is activated automatically if the enemy team boost turn meter at all. All this utility make him extremely hard to beat!

Candraphon is a great champion since the buffs of September 2020.

On the Hunt - 5 Turn Cooldown

From the Shadows (Passive) - 3 Turn Cooldown

Increases Ally Attack in Arena by 33%