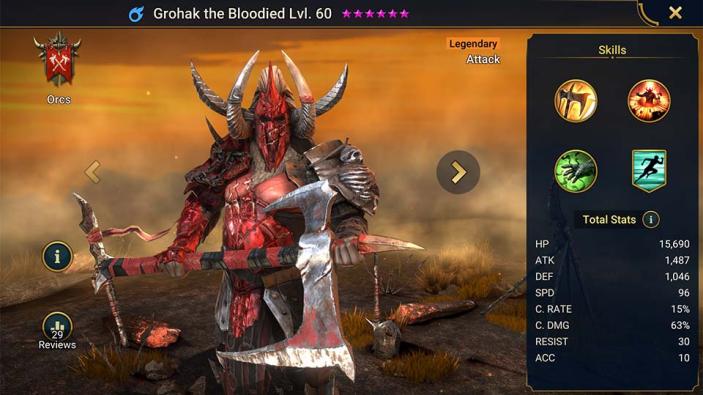 For many a month in Teleria, Grohak has been bullied as the least desirable and worst legendary champion in the game. Arguably misunderstood he wasn’t the worst champion but also was a bit dated and underwhelming. He could nuke pretty hard in the arena but wasn’t quite top tier and outside of the arena there were far better options.

In Patch 4.70, Grohak got a bit of love and now is actually a very decent legendary. His A3 now includes a Weaken debuff adding utility. His A2 also now increases his Turn Meter for every critical hit. These changes whilst don’t increase his damage directly, helps him fit into more teams as he can rotate his abilities faster and bring more than just raw damage. With a 100% Turn Meter steal on his A3 and a 24% speed aura in dungeons – consider pulling Grohak out of your vault and letting him give his axe a whirl.

Increases Ally SPD in Dungeons by 24%