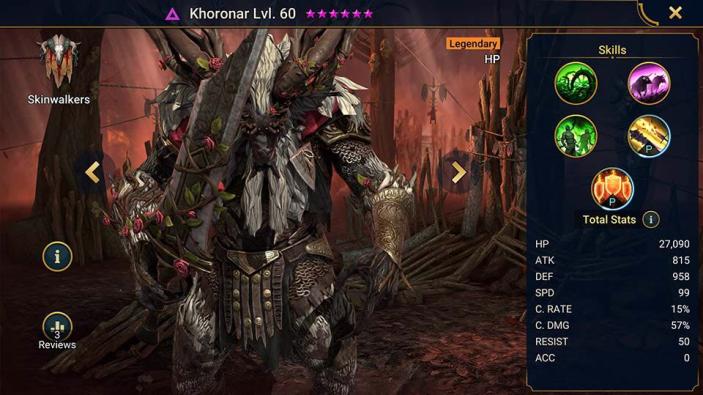 Khoronar is a Void legendary from the Skinwalker faction. Knoronar has a huge amount of control within his skill set including constant enemy turn meter reduction and AOE provokes.
Khoronar has improved abilities when paired with Minaya which I was able to showcase when they first came out. They were able to 2 man every level 20 dungeon when paired together!

Khonorar is mainly used in Arena to lock out enemy teams and as a dungeon carry to allow all your main damage dealers room to do their nukes! As an HP based champion Khoronar has average damage and in my opinion doesn’t hit hard enough to make him valid to be built as a nuker. He is better placed in teams as a control champion and excels at this in Faction Wars.
Knoronar can certainly help in Doom Tower on Kuldath the Magma Dragon with his provoke and against Sorath controlling Turn Meter.

Has a 75% chance of placing a Provoke debuff on all enemies for 1 turn. Places a Block Debuffs buff and a 60% Increase DEF buff on this champion for 2 turns. Removes all debuffs from this champion beforeplacing the Block Debuffs and Increase DEF buffs if Minaya is on the team.
Level 2: Buff/Debuff Chance +10%
Level 3: Buff/Debuff Chance +15%
Level 4: Cooldown -1

Places a 60% Increase DEF buff on all allies for 2 turns if this champion kills an enemy.