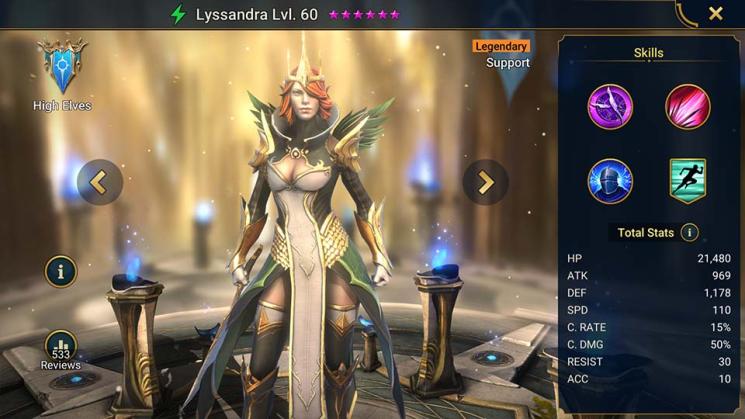 Lyssandra is an OG champion that holds a special place in Raid because of her crazy Turn Meter manipulation. She is a Spirit affinity legendary from the High Elves faction. She is the best champion in the game at manipulating turn meter, meaning she makes your champions get more opportunities to do damage! Lyssandra has a team speed buff, turn meter fill whilst also reducing enemies turn meter, a single target deplete turn meter and a speed aura. Literally the Queen of speed she is useful everywhere and specialises in Arena and Fire Knight. Due to her abilities and good base stats she is best in speed sets with accuracy rolls, perception sets, or accuracy sets with speed rolls. You should prioritise speed, accuracy, HP% and Def%. She can hit fairly hard on her A1 so an end game player may also priorities some crit.
Lyssandra’s A1 is also capable of passing the Hex debuff back onto the Magma Dragon in Doom Tower which could set up some interesting plays!

Increases Ally SPD in all battles by 24%.