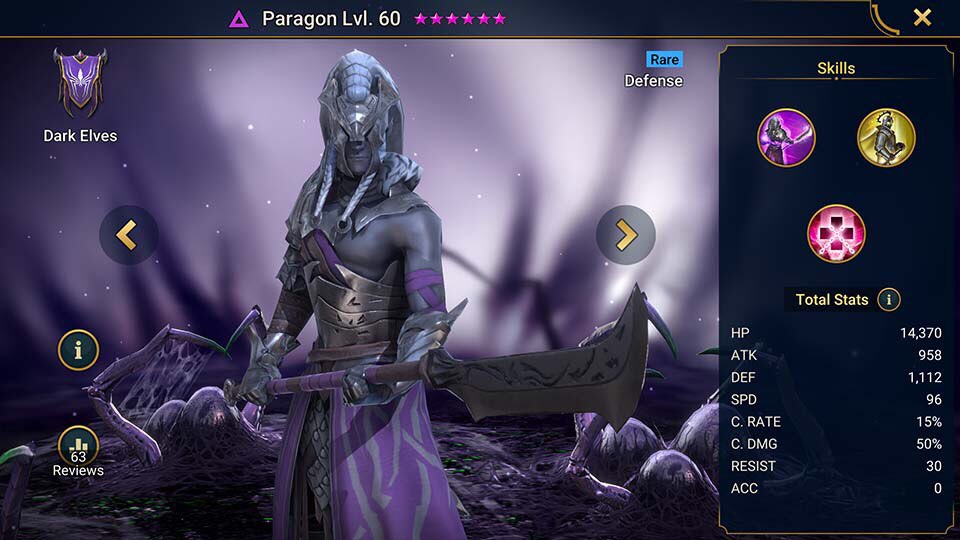 Paragon is a Void affinity rare from the Dark Elves faction. Paragon is known as ‘Mr Cheese’ the champion that enables you to win things you should not.
He has an unkillable buff that he can maintain 100% of the time provided on 1 person. If you manually cast it on yourself you can tank Dungeon enemy waves such as all the spiderlings, their AI will continuously attack you (AI does not recognise that the person with this buff wont die). This can be seen in the video below! When Iron Twins was released Paragon was up to his old tricks again soloing this boss right through to Stage 15. The patch in September ’22 put a stop to this!
Paragon is also great to help you beat Nightmare Campaign final stage as Mortu Mcaab wont kill you with his Peril skill through this buff.

Places an Unkillable buff and a 25% Increase ATK buff on a target ally for 2 turns.
Level 2: Cooldown -1
Level 3: Cooldown -1

We recommend you use these blessings for Paragon.
Team Blessings should be limited to 1 per team. For more information, please read our Team Blessings guide here (coming soon).