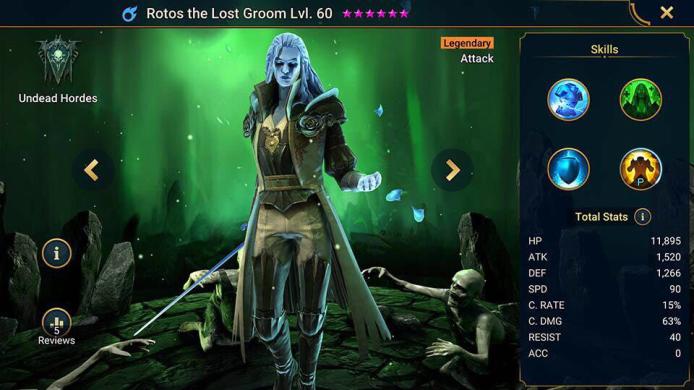 Rotos was originally a trusted servant of the Knight king wandering north of the wall looking to end the world of men. Then he met his queen Siphi and they left for the world of Teleria.

Rotos was introduced as a fusion to Raid: Shadow Legends in February 2020. Rotos became the strongest Arena champion ever to enter the game and when partnered with Siphi the Lost Bride it resulted in him being a one man killing machine!

In September 2020 he was nerfed and now he sits in the meta as a strong legendary for Arena and Clan Boss and GOD tier for Ice Golem (mainly due to his ability to block revive on an enemy).
In January 2022 he was then buffed to be able to reduce enemy MAX HP to bosses enabling his to be a good option to destroy the Scarab bosses shield and stay alive with his A2 ability!
Rotos is still seen even after the nerf of September 2020 as one of the best and most consistent arena champions due to his ability to cut through enemy defence with his A3 ability and his ability to stay alive. When paired with Siphi its also very hard to debuff him as she just cleans those nasty debuffs away!

When building Rotos make sure you have 100% Crit rate, high Crit damage and a strong HP% pool. Rotos has an amazing passive allowing him to take a hit but lose a maximum of 50% of his health. When attacking with his A2 he can also drain HP to build up towards a very high HP pool. He has one of the most interesting kits of any champion in Raid: Shadow Legends.

Attacks 1 enemy. Decreases the target’s MAX HP by 20%, then adds that HP to this Champion’s own MAX HP.